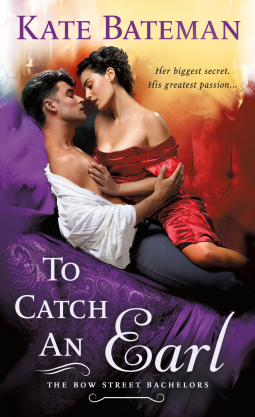 Alex Harland, Earl of Melton and dedicated rake, never pictured himself as an agent of inquiry. But the thrill of investigation is a challenge he now embraces. When he’s asked to pursue the Nightjar, a notorious thief who is reclaiming France’s crown jewels, the case throws him into the path of the beautiful and equally elusive Emmy Danvers, reminding him of the only puzzle he’s never solved: the identity of the mysterious woman who once stole a kiss from him—and left him wanting so much more…

WILL HE SURRENDER HIS HEART?

The daughter of a thief, Emmy learned long ago how to keep her secrets safeguarded—and, as the notorious Nightjar, her love for Alex Harland is one of them. With the determined earl hot on her trail—and making her hot under the collar—Emmy has no choice but to keep her distance. But when a moment’s danger threatens Emmy’s life as well as her name, will Alex finally discover that he’s followed every clue…to true love?   AMAZON LINK
3.5 STARS

This book had pretty good main characters with plenty of dangers , clever ideas and emotional ups and downs.
Emmaline or Emmy as she is called never really have a chance for a normal life.  She craved it but is caught the thieving way of life.  Since the age of 14 she was pressured by her father into the life of crime. Although her father viewed it differently.  He saw it more as a noble cause along with the thrill of being so skilled that he had not been caught.  Emmy also had more of her family who were in cahoots with her in the jobs that she pulled.  Since her father's death, it was just Emmy, her brother Luc (who was wounded in the war) and her regal grandmother Camille.  Not to be forgotten is also Sally Hawkins who almost family and has been a huge help in so many ways.  She was a master of disguises that Emmy needed.  She also had her eye on Luc.  You'll have to read to see if that goes anywhere.  Each one of these people added a lot to the story.  That I did enjoy.  Also all the clever ideas that "the team" came up with when it came to sneaking into places to rob.

Alex Harland was an interesting opponent whose emotions seesawed back and forth when it came to Emmy.  And what was that elusive scent he keeps smelling? It was driving him around the bend every time he smelled it.  It reminds him so strongly of the mysterious woman he met years ago. She was the one who wore such a unique perfume. His life moved on but he never forgot her. He was on the side of the law and he began to suspect Emmy of more than just being beautiful and mischievous.
At first I wondered about the name "Nightjar" being the title given the famous thief.   It made more sense when I read later that it was a nocturnal bird and that it blends well with its environment.   Then it made perfect sense.
Everything was well described in the story without being overwhelming or too stuffy. I will also add that there is some sexual scenes in the story.  I also wish that I had liked it more; although it did have it's moments.

''I voluntarily read and reviewed an advanced copy of this book. All thoughts and opinions are my own.”
Posted by Flame at 9:13 PM