BOOK REVIEW- Into The Black ( A Scifi Mystery) by Beth Barany * 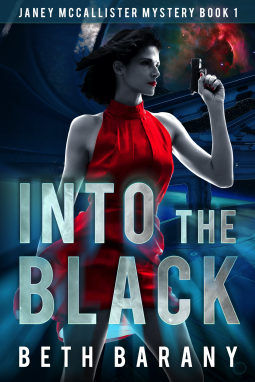 Into The Black is perfect for fans of J.D. Robb’s Eve Dallas books and Killjoys and CSI. It contains a slow-burn romance, enhanced humans, cool high-tech gadgets, a futuristic vision of the Earth, and a tough kick-ass heroine with secrets.

Description
She wanted to make her mark. How hard could it be?
In 2130, at Bijoux de L’Etoile, a high-end casino orbiting Earth, you can get anything you desire.
Newly-hired as an investigator, Janey McCallister wants to solve her first big case—the theft of a priceless gem.
When her case of theft escalates to murder and points to the seedy underbelly of world affairs, Janey has to rely on her new team and trust the mysterious insurance investigator, Orlando Valdez—before a killer escapes into the black.  AMAZON LINK
4 STARS

This was an interesting book.  It had an out of this world (pun intended) world  that is built.  It's made from scratch and in depth, full setting of this imaginary place.
The main character Janey was also someone who had some pretty good depth and it became easy to become a cheerleader for her success.  She was smart, tough, loving towards her mother, and the reader also gets to see her flaws too.
Orlando Valdez, wow what a complex person he was.  Interesting but he also kept not only Janey confused, he also had me wondering what his deal was.
Speaking of confusing, there were times that I was almost as confused as Janey as to what was going on.  Don't get me wrong, it made the story  even better for me.
I usually like my stories to have some romance in them and this one had two people off balance with each other.  Oh, the attraction was there and some flirting with a promise of maybe more but that was it.
Everything comes to a good conclusion with a peek into the next book in the series.
One question that I didn't feel got answered  was, what was going on with her enhancement?  Still, it was such a well written story, I didn't hold that against the author.
By the way, I loved the cover for this eBook !


"I voluntarily read and reviewed a copy of this book. All thoughts and opinions are my own.”