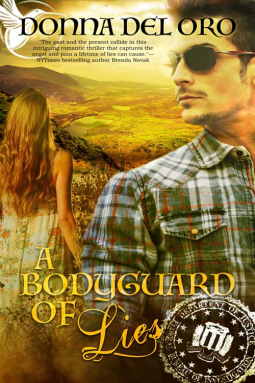 FBI analyst Jake Bernstein is recruited to go undercover and investigate an American grandmother wanted for war crimes during WWII but currently on a tour of England and Ireland with her granddaughter. Jake joins them and runs into complications when his growing attraction to the woman's granddaughter challenges his obligation to remain emotionally detached. As the investigation intensifies, a neo-Nazi group tries to prevent him from learning the truth and Jake struggles to stay alive long enough to either prove the woman's guilt or exonerate her.

Despite Meg Larsen's mounting passion for the stranger who has joined their tour, she suspects he's not who he claims to be. When she realizes her grandmother, the woman who raised her, is the target of the man's investigation, her first instinct is to protect her. Eventually, however, Meg must face the possibility of her grandmother's lifetime of lies while forced to trust a man who has become both their nemesis and bodyguard.  AMAZON LINK
4 STARS

I had mixed feelings on this book.  I will say that the mystery of it was well written, the world building was excellent and each person's personality well done.  I like history and while it was part of the story it also felt like it was a bit too much history and surroundings for me.
Jake- boy, was he in a tough spot.  He has a job to do but he also knows quickly that Meg is "The One."
Mary McCoy Snider- she was quite the surprise from the very beginning (the prologue) until the end.
Horst/Cousin Tommy- another person who was an important figure in the story.
Granddaughter....Meghan Larsen (Meg)she was SO over her head but she was no spineless chick. And her emotions about her Grandmother and Jake and the whole scene she was thrown into hit all the roller-coaster feelings that you can think of.  I liked her and her love for Mary against all odds.   And her attraction to Jake was causing her all kinds of turmoil and some happiness to though.

It starts with a dramatic prologue.  Setting everything up really well.  There is times of switching from the past to the current time but it was done smoothly.  It didn't cause any confusion.
The whole chase about who The Hummingbird and The Black Widow really are was well played.  It also caused a whole lot of emotions for all that are involved as well as some unexpected dangers.
Of other interest is the fact that the Turquoise eye color was an important identifier. And I enjoyed the information about Mary and Meg being able to be vocal mimics.  I found that an interesting phrase and explanation.
I feel a little cheated in the end.  Like I was left hanging a bit.  What happens next for Meg & Jake?  I know there was a semi-promise but did they get a H.E.A?  They both did agree that they had had a strange courtship.  I would have liked a bit more like maybe an Epilogue.  Or maybe the author is planning another book?