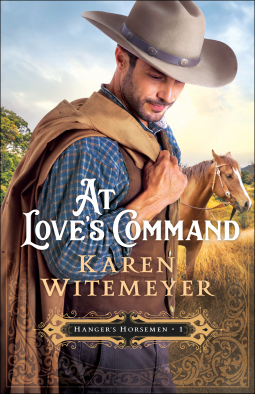 Haunted by the horrors of war, ex-cavalry officer Matthew Hanger leads a band of mercenaries known as Hanger's Horsemen who have become legends in 1890s Texas. They defend the innocent and obtain justice for the oppressed. But when a rustler's bullet leaves one of them at death's door, they're the ones in need of saving.

Dr. Josephine Burkett is used to men taking one look at her skirts and discounting her medical skills. What she's not used to is having a man change his mind in a heartbeat and offer to assist her in surgery. Matthew Hanger's dedication to his friend during recovery earns Josephine's respect, and when she hears of her brother's abduction, he becomes her only hope for rescue.

Matt has stared down ruthless outlaws, betrayal, and injury, but when a bossy lady doctor crawls under his skin, his heart is tempted to surrender. And when she is caught in the crossfire, he may have to sacrifice everything--even his team--to save her. AMAZON LINK
4  STARS

The first thing that caught my attention was the name of the author.  Since I've read a few of her books and I liked them I was quick to snatch up this book. Also the unique information on the two main characters was the second thing.
This was a good solid story with plenty of action and men of honor fighting men without honor.  Each of Hanger's Horsemen were interesting in their own right.  They worked so well together as a team too.
Dr. Jo as she is called is a honest, hard-working dedicated physician.  She also has strong family ties.  I liked her spunk and grit and how she and Matt spark off each other.
Added to the fight against evil is the reliance on God which was something that I enjoyed.  It added to the story without taking over.  There were also several times where divine intervention comes to play.  Being at the right place at the right time with people and things that were needed seemed just right.
Good ending of the story with an Epilogue that rounds things out very nicely.

"I voluntarily read and reviewed an advanced copy of this book. All thoughts and opinions are my own.”
Posted by Flame at 12:49 PM