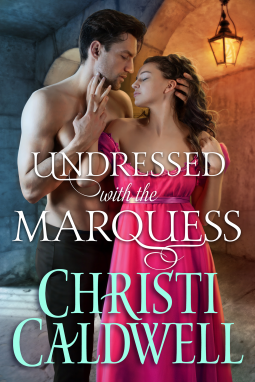 For a heartbroken woman and a daring thief, the most tempting proposal comes after marriage in the unforgettable final Lost Lords of London novel by USA Today bestselling author Christi Caldwell.

Long ago, Dare Grey disappeared from privilege to help the downtrodden. Abandoning his future as a nobleman, he instead came of age as the most skilled—and wanted—thief in East London. But when the Robin Hood of the Rookeries is captured, his influential grandfather offers him a choice: face his heritage…or the gallows. And to step into his rightful role as marquess, Dare must find a wife.

Little do they know, he already has.

Marrying Dare rescued young Temperance Swift from a brutal life. Yet his commitments were elsewhere, and Temperance would not continue in the charade of a relationship that surely would end with her husband in Newgate Prison. It broke her heart to leave the righteous bandit, but she established a new life for herself as a seamstress. One who respected and obeyed the law and kept herself safe—if lonely.

But Dare finds her and offers to resume their role as husband and wife, and this time it will yield a fortune. A fortune that could be used to help the disadvantaged, without resorting to ever-more-daring thefts…

Once they’re ensconced in the comfortable family fold of Mayfair, the romance they thought ended years ago stirs again. But when every kiss is shadowed by the mistakes of the past, and a haunting secret Temperance bears, will love be enough to save them from such an uncertain fate?  AMAZON LINK

This book had a slow start which I think is because of the continual rehashing of their pasts.  That foundation of course was necessary but felt like it was gone on longer than I liked.

This was an emotional story with different griefs expressed.   But Dare kind of made me think of him as an urban Robin Hood.  He felt the hurts of others, while feeling unworthy being himself.  As the story continues we begin to see the exact reason that is such a huge part of him.

Temperance was a good main character as well.  Her name could have easily been Honor.  Because even though she grew up under horrific conditions , she still holds high standards.

This story does come to a good conclusion but I am sorry to say that it just didn't grab me as much as I would have liked.   But I am giving it 3.5 Stars on Amazon when it opens to reviews because it was a fairly deeply written story.  It's not the author's fault that it just wasn't my cup of tea.  I'm sure others probably won't feel the same.