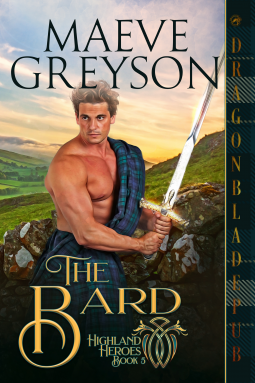 The fiercer the battle, the sweeter the spoils

Sutherland MacCoinnich flirts his way into the hardest hearts and most forbidden beds. He’s such a charmer, even the lasses that he loves then leaves behind never hold any ill will against him. All the ladies adore him. All except one. As lovely as she is infuriating, the daughter of Chieftain Greyloch barely gives him a passing glance. When she does, it’s only to tell him he smells more like a horse than a Highlander. She even threatens to shoot him if he ever sets foot on her land again. And to add insult to injury, the woman cost him a keg of fine whisky in a bet.

An enticing trinity of beauty, wit, and fire. She would be his. Forever.

If Sorcha Greyloch doesn’t marry soon, she’s sure to be the death of her father. Many a desirable suitor has come calling, but she has refused them all. She knows who she wants. She’s loved Sutherland MacCoinnich since the first time he darkened her clan’s door. But she’s not about to tell him that until she has him on his knees. After all, most men share a particular trait. They’re driven to possess what they think they can’t possibly have.

The womanizer of Clan MacCoinnich is about to be tamed by the one woman he feared he would never win, but unexpected danger lurks in Castle Greyloch. A danger that threatens the dueling lovers’ future.

The title of this book makes sense much further in book when Sutherland uses his sweet talking smooth voice In song to Sorcha.  I liked that it wasn't overdone though. It had already been established that his smooth talking had charmed many a woman. He'd charmed, conquered and moved on. Sorcha had determined some time ago that she wouldn't be another in the number of those left behind.    And she had quite the plan she was working on to catch his interest and gain him as a husband.

I liked that the meaning of the title of this book makes sense further into the story.  It fit when it came to Sutherland.  He was a smooth talking man who later turns that into a smooth use of his words in song as he woos Sorcha.  Sorcha knows about his charming ways and how he has left many a woman behind after charming her.  She was determined to have him as husband and not be numbered in those left behind.  I liked that she was clever about her plans that she is working without being malicious.  And her plan has got his attention like no other woman ever has.  Sorcha doesn't want to just be a woman who has his attention for a time but for all time.  She won't permit any more wandering eye once she gets him and she plans on being faithful also.  The flirting, the romance and the catching was fun and tender as well as the fiery moments on Sorcha's part too.

Pay attention to the other players in the story..Jenny (Sorcha's foster sister),  Heckie (a young man who is a simple friend from childhood), Magnus (close as a brother to Sutherland) , Garthin and his mother, Lady Delyth Culane (unwelcome, hard to remove guests).  Is the killing danger coming from any of them?  There sure has been a lot of suspicious "accidents" going on all of a sudden.  You just never knew when or how the next danger was going to show up.  The author had me going around and around trying to figure out the who and why of it.  When the truth comes out it's a doozy.

As the story ends (with a H.E.A. and a good Epilogue) there is also surprise twist waiting for Magnus.

On a side note, it was mentioned that there is a Dragonblade blog that you can signup for.