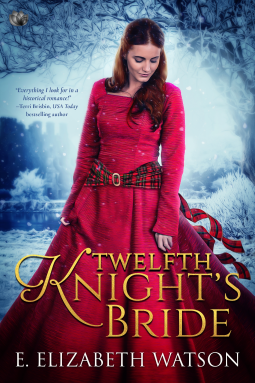 Lady Aileana Grant just wants to help her starving clan at Christmastide. So she pilfers some vegetables from the bastard Laird James MacDonald--the Devil, they call him. When the Devil shows up and demands marriage as recompense for the thievery, Aileana can’t believe it when her brother agrees. Even if she’s able to negotiate a severance on Twelfth Night, that’s still two weeks to put up with the laird in enemy territory. She’s counting down the days, even if James isn’t quite the disgusting cretin she’d imagined.

James needs to marry an enemy bride in order to inherit his fortune. Cursed restrictions. He’d been unable to look away from Aileana’s untamed beauty ever since she squared off with him. He might as well handfast with the infernal lass. He’d get his money and perhaps some peace among the clans. He has a fortnight to win the heart of the lady with the voice of an angel despite her sharp tongue.

Twelfth Night is merry and bright as Aileana and James realize a true connection between them. But when Aileana discovers the reason the Devil forced her into marriage, how can she ever believe he truly wants her?  AMAZON LINK

I enjoyed this book; it had really good main characters and plot.  And the dedication was  a sweet salute to the author's support group (Morning Writer Chicks) that made me smile.

Speaking of spunky chicks, Aileana was one.  Even though she is noble born, she is not afraid of hard work. She works hard and pitches in wherever she is needed.   Her clan are slowly starving and she feels their pain.  She's a clever lass who is also loving and loyal to people she cares about.

James was a fierce warrior but there is also so much more to him.  Something that we get to see over time when James isn't sparring with Aileana.  He had quite the sweet, tender side that he mostly keeps hidden from others.  His sister is the only other person who has really seen that side of him.  He also carries some heavy griefs.

This story had plenty of emotions, and some of that comes from a little girl named Maudie.  She also added some humor too!  She made me smile more than once.  She also had something in common with Aileana..she was a hard worker too.  There are also some dangers, and a romance that I enjoyed.

All in all, I really liked it and stayed involved all the way through.