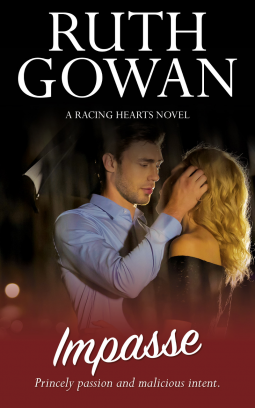 One of the hottest genres! a Little romance, a few thrills, a bit of darkness and mystery it’s all here in IMPASSE

When family is the enemy who do you trust? To Jemma, the greatest challenge was driving the gruelling Paris-Dakar rally. She was wrong, her talent has finally been recognised but she can’t free herself from her nemesis a sinister force which lurks and threatens her very life.

Passionate but repressed, has Jemma at last found a worthy lover? But he too has secrets. Can they resolve the impasses, overcome strong opposition and find happiness?

Gareth is determined to compete in the famous Paris Dakar Rally. Hiding his real identity as a Prince, one night of reckless passion complicates things. He intends to be free to follow his dream, until he meets her, ‘the one’. He better than anyone knows what’s she’s been through, and he intends to prove to her that he would never hurt her. Far from it. He plans on loving her if only she would let him.

Circumstances change radically for both of them, threats, attacks and tragedy effect their lives bringing them together yet tearing them apart…AMAZON LINK

I had mixed feelings on this one.  In some ways it was different than the usual ones of this type.  It was also at times somewhat predictable as well.  In the areas I liked, there was some unexpected depths.

Both of the main characters were good but Jemma really the most because of her past AND all the things happening in her present.  There was a lot of abuse still going on and further along in the story, closer towards the end I was ready for that part to end.

There are good secondary people in the story.  Most end up being there for Jemma in varying ways and that I liked.

There are several twists and surprises and I liked how the dangers were dealt with.

The story gets points for the H.E.A. and sweet Epilogue.  Still it wasn't enough to make this a keeper for me.