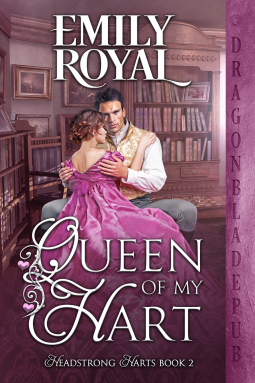 Sometimes, a losing hand can be the greatest victory of all.

Born into poverty, self-made banker Dexter Hart is now one of the wealthiest men in London. His ambition is to marry a title—and who better than the daughter of his enemy Viscount Alderley, the man who once whipped him as a boy, and on whom he vowed revenge? But Dexter’s plan backfires, and he finds himself tricked into marrying Alderley’s illegitimate daughter instead.

Margaret Alder has known heartbreak and betrayal, and has lived in exile and disgrace for eight years. When her natural father rips her away from her home, he bullies her into marrying a stranger. The marriage thrusts Meggie into a world she doesn’t understand, with a bridegroom even more reluctant than she—a world of society, traditions and etiquette, where even the servants don’t hide their scorn. But she soon learns that beneath her husband’s ruthless exterior lies a passionate man who renders her breathless with his fiery kisses and skilful touch.

Meggie rises to the challenge and proves herself an intelligent and kind-hearted woman, and Dexter wonders whether Fate chose for him a better wife than he would have chosen for himself.

But when Meggie’s past returns to haunt her, she must decide whether she can trust the husband she’s growing to love—or risk losing him forever.  AMAZON LINK

I had mixed feelings on this story.  I liked some parts better than others. For me, it was a bit like a roller coaster ride.

Poor Meggie just can't seem to catch a break.  It seems like just about everyone wants to use her, in one way or another.  Even when things start to smooth out a bit between her and Dexter, the creeps just keep coming out of the woodwork. Even through all of her troubles of being unloved and undervalued; her goodness and kindness continues to shine through.

Dexter was one handsome but stern man.  Reason over emotions was part of his motto.  Because of his harsh upbringing he had hardened his heart especially against showing weakness in any form.  His harshness causes problem after problem for him even alienating most of his siblings.  Business success was definitely his though.

I will say that I liked the stunning surprise that comes for Meggie towards the end of the story.  It brought tears to my eyes.  The Epilogue was also welcome.