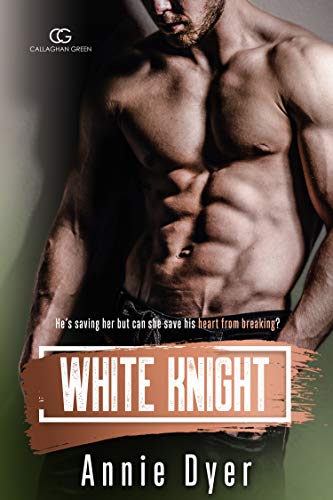 Sexy. Brave. The biggest pain in my workaholic ass. Killian O’Hara can never be mine.


I try not to notice how he’s broader, ripped or the way he still smiles. I try not to care when he has a date. I try not to remember when we were together and how I broke his heart.


And there are too many reasons why I can’t be his.


I’m married to my job as a lawyer.
He’s still my brother’s best friend.
And I have a secret. One I need to protect him from.


Ex-military, Killian’s now responsible for keeping me safe when a case I’m working on gets deadly.


But can I keep my heart safe from him?


WHITE KNIGHT is an achingly steamy second chance/brother's best friend romance with no cheating and a happily ever after. It's part of the CALLAGHAN GREEN SERIES but can be enjoyed as a standalone.   AMAZON LINK
3  STARS

This book started out pretty good with what I thought was some pretty good potential.  But I ended up being somewhat disappointed as time went on. The story started falling apart for me before the 50% mark on my kindle.  It was the constant rehashing over and over of the main character's past and the Big Secret.   Added to that was the fact that it felt like there were way TOO many people in the story to keep track of.  Even though Marie and a few other people had their moments.
I do give the author credit for both Killian and Claire having depth as main characters. There is plenty of emotions shown as well.
There is plenty of descriptions of different locale's and there is also quite a bit of details when it came to that.
One thing that kind of irritated me was Claire constantly dragging her feet when it comes to "telling" Killian why she cut him out of her life.  And her thinking she just didn't know how to tell him?  Come on girl, you've had 13 years to figure that out.
The case that Claire is working on definitely comes with some clear dangers.
There is a H.E.A. but I think this book is my "one and done" when it comes to this series.
Posted by Flame at 10:22 PM