BOOK REVIEW- A Highlander is Coming to Town A Highland, Georgia Novel by Laura Trentham * 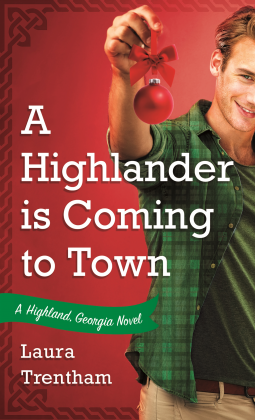 The third book in the Highland, Georgia romantic comedy series from Laura Trentham, A Highlander is Coming to Town, full of love, laughs...and highlanders!

Holt Pierson is dreading Christmas. His parents absconded to Florida for the season and left him to handle the family farm which will be his one day—whether he wants it or not. Driven by duty, Holt has always followed the path expected of him. But lately, he’s been questioning what he wants and where he belongs. Will assuming the responsibility of the Pierson farm make him happy or is there something—or someone—else out in the wider world calling to him?


To Claire Smythe, the Scottish lead singer of a touring band, Highland, Georgia, is the perfect place to hide . . .until a very handsome and deeply curious Holt begins to ask all the questions Claire doesn’t want to answer. As Holt draws Claire out from under and into the fabric of small-town life, can Claire put the past behind her and embrace the unexpected gifts of the season—including the new and lasting love?  AMAZON LINK
3.5 STARS


I have read a few other books by this author and I liked them.  This book however had  such a slow pace which I didn't enjoy it as much as I had hoped.  The background for both of the M.C.'s was set up pretty well as they were feeling their way around each other.  However, I was beginning to despair of the story moving on more quickly any time soon.   I also felt that several problems that Claire especially was facing was re-hashed so much that it also slowed the story.
Having said that I will also say that there were tender moments in the story, along with a small town charm and it's people.  Descriptions of the town and people was well done too.

Ms. Meadows was the lady that Claire was working for and staying with.  She was one crusty character. She'd lived by herself for many years and she was really good at not letting people into her space or home.  But after a fall, she needed help and couldn't put it off any longer.  But she had her fiercely guarded boundaries. But that suits Claire right down to the ground because she's got some secrets of her own. And she's not ready to face up to them quite yet.
Laid of the Game, Holt Pierson was truly the hero in this story.  A yummy man with a tender heart who began to realize how lonely he really was.  His ability to let Claire's snark roll off of him was excellent.  He did a good job of dealing with it.  She was complicated and she fascinated him. He also saw what few did.  That she was strong and yet fragile too.
I kept wondering how everything thing would be concluded and it does well.  Including the H.E.A. that we had hoped for.


"I voluntarily read and reviewed an advanced copy of this book. All thoughts and opinions are my own.”
Posted by Flame at 8:24 AM