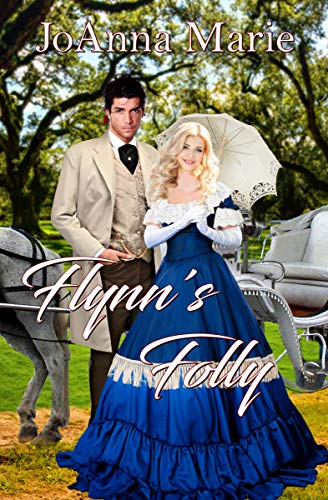 (Flynn and Lara were first introduced in “The Virgin Widow”, and this is their story six years later. “Flynn’s Folly” can be read as a stand-alone book or as a sequel to “The Virgin Widow”.)
It’s 1869. The bitter war between North and South is long since over. Survivors from both sides strive to rebuild shattered lives.
Flynn Sinclair, the younger son of a marquess, has known his share of heartache. The death of his beloved Melody has left him devastated. To assuage the pain, he spends his days and nights with his friends in raucous debauchery, scarcely acknowledging the toddler girl he’s left to raise alone.
His brother’s ward, Lara Beth Newton, has morphed into a winsome blue-eyed beauty. Only the Sinclairs know her past, that she was born into slavery. With the help of her dear auntie, Lara escaped from that living hell. In London now, Flynn’s father has agreed to sponsor her for a Season, with the hope that she will make a good match.
Flynn is smitten with the young beauty and has but one objective: to make her his wife.
Lara rejects his proposal. There is no time for marriage in her life. She, too, has but one objective: to find her beloved auntie.
Lulubelle risked her own life to give her niece the precious gift of freedom and has been missing for seven years now, sold off by her master as soon as he learned of her role in Lara’s escape.
When Flynn convinces Lara that her only hope of finding her auntie is to join forces . . . and marriage . . . with him, she at last agrees. The two embark on an adventure that takes them from the drawing rooms of Carolina, to Georgia’s farms, to the plantations and swamps of Mississippi, and on to the vibrant city of Havana.
Will Flynn and Lara find Lulubelle and bring her home? Or, is Lulubelle one of the many formerly enslaved who did not survive the war?
The search for Lulubelle begins!   AMAZON LINK
4 STARS

This was an emotional story with good main characters.  Flynn Sinclair's family was also a good addition to the story as well.  So are several other people and that includes Tom, the man who was assigned as their driver on Flynn and Lara Beth's journey.
There was quite an adventure that went on when it came to trying to find Lulubelle.  And also a huge surprise twist or two towards the end.
The book also contained some painful looks at what it was like for many of the slaves during that time.   They weren't looked at as people but more like product or cattle; "things" to make money on.  Even after the war that set them free, things didn't look all that much better for many.
There is a H.E.A. for the main characters though.
Posted by Flame at 10:50 AM