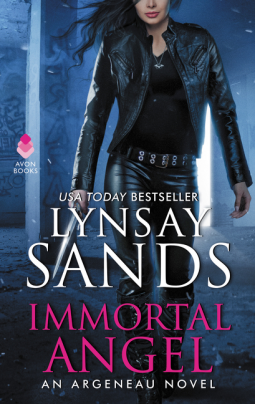 In a sizzling new Argeneau novel from New York Times bestselling author Lynsay Sands, a gorgeous mortal encounters his greatest temptation…
For almost two centuries, Ildaria Garcia has been on the run, a trouble magnet with a knack for taking down bad guys. Lately, her vigilante tendencies have drawn unwelcome attention to her fellow Immortals. Forced to relocate, Ildaria is supposed to lay low in a new town. Instead, she quickly entangles herself with six and a half feet of muscular, tattooed trouble.
Joshua James Simpson Guiscard, aka G.G., knows a lot about Immortals—enough to make him wary. Yet from the moment Ildaria walks into his club, he feels desire stronger than anything he’s known. Accepting the fact that they might be life mates is disconcerting. But when her past catches up to them, G.G. faces a choice—confront his demons at last, or lose a passion that’s hot as hell.
AMAZON LINK
3 STARS


I was quick to grab this book when I saw who the author was and the series that it was a part of.
The eBook cover was something that caught my eye as well.  I liked the cover a lot and hoped for the best for the story.  Because even with this series I either really liked the story or it fell short of that.  This story left me with mixed feelings about it.
The Prologue confused me at first, making me wonder where this fit in with the story. It does get cleared up later but it had me scratching my head for a while.  I will say though that it was a pretty dramatic beginning to the book.
Both Ildaria and G.G. were good main characters who each had their own issues. Ildaria's reach back MANY years because of her immortal status.  She'd  suffered a lot throughout the years and is still on the run and trusting no one.
I did like the different angle that this story had with G.G. being mortal but having extensive knowledge and acceptance of Immortals.  Acceptance yes but wanting to be one would be a strong No.  You can see why that's going to be a problem, right?
G.G. was such a kind, compassionate man who was always available to people when they needed to talk.  I liked him a lot and enjoyed his love for and gentleness with his fur-ball, quirky small dog.  I know it was mentioned that G.G. was a handsome guy but I had a hard time imagining it.  He had a tall, green Mohawk , so maybe it was just me.  That didn't appeal to me but his personality, kindness and his way of helping others did.
Ildaria had other people who stepped up to help her.  That was a bit difficult for her because she's been going it alone for so long.
Those other people added depth to the story.
I will say that although the way Ildaria was turned was really different, I also wasn't that much a fan of that.
There is a good end to the story that included a surprise twist and an Epilogue.


"I voluntarily read and reviewed an advanced copy of this book. All thoughts and opinions are my own.”
Posted by Flame at 8:43 AM