BOOK REVIEW- Woman on the Edge by Samantha M. Bailey * 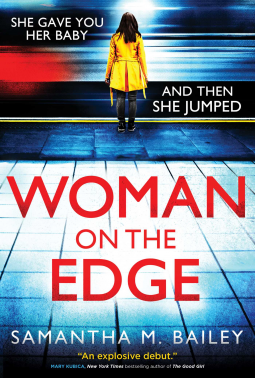 A moment on the subway platform changes two women’s lives forever—a debut thriller that will take your breath away.

A total stranger on the subway platform whispers, “Take my baby.”

She places her child in your arms. She says your name.

In a split second, Morgan Kincaid’s life changes forever. She’s on her way home from work when a mother begs her to take her baby, then places the infant in her arms. Before Morgan can stop her, the distraught mother jumps in front of an oncoming train.

The police take Morgan in for questioning. She soon learns that the woman who jumped was Nicole Markham, prominent CEO of the athletic brand Breathe. She also learns that no witness can corroborate her version of events, which means she’s just become a murder suspect.

To prove her innocence, Morgan frantically retraces the last days of Nicole’s life. Was Nicole a new mother struggling with paranoia or was she in danger? When strange things start happening to Morgan, she suddenly realizes she might be in danger, too.

Woman on the Edge is a pulse-pounding, propulsive thriller about the lengths to which a woman will go to protect her baby—even if that means sacrificing her own life.  AMAZON LINK
4.5 STARS


This story starts out with the expected twist because of what is mentioned in the book blurb.  But, the tension, mysteries and surprises  kept coming.  It really is more about those things with just a touch of friends developing into a romance.
I liked that there was both Morgan Nichole's P.O.V.'s in the story.  And for me, at least it really wasn't super hard to keep up with who was sharing.  I definitely felt sorry for both of them for what they were going through.
The insistent question throughout is, "Why was Morgan chosen to take and protect Quinn?"  The other question is, "Is there a connection between Morgan and Nicole ?" Morgan has never met Nichole, at least not that she knows of.  The puzzle just keeps getting bigger and bigger for her.
There is plenty of fear, tension, emotion, danger and action in the story.  It got to the point where I was bouncing all over the place; suspecting one person after another.
When the big reveal comes it's just as dramatic as you would hope.  And the manipulator/tormentor/killer was someone who I had finally suspected towards the end.  But there was also more to that person's story as well.
I liked how the story ended.  Everything concluded as best as it could be and with hope for the future.