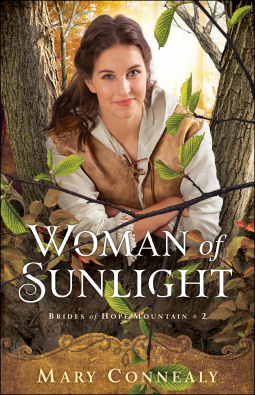 After years of isolation on top of Hope Mountain, Ilsa Nordegren may finally be ready to leave. Raised to fear the world, Ilsa and her sisters never planned on coming down, but when the Warden family arrived in need, they had to help. And it may cost them everything.

Having made his fortune, Mitch Warden returned home and found the family homestead abandoned. In a land grab, a ruthless cattle baron had forced his family to escape up the mountain, and when he follows, the last thing he expects is to fall smitten to a black-haired woman who dresses like Robin Hood.

Warden is intent on helping his family reclaim their land, but doesn't realize the risks his past has brought. Dangerous men have tracked him, and rather than risk innocent lives, he's determined to end the danger. But that means a journey to the city--and when Ilsa insists on joining him, the mismatched pair suddenly find themselves on a venture they'll never forget.
AMAZON LINK
5 STARS

(I love this description! )

This is the second book that I've read in this series and I ended up loving it too.  Having read two of the sister's stories now I am eager to read the last one about Ursula.  But that is for another day.
The main characters in this story are well drawn.  Both Mitch and Ilsa are intense in their own ways with quite a bit of depth in the story. It helped to be able to get both of their P.O.V,'s as well.  I enjoyed how it all meshed together.
Mitch knows himself pretty well and makes some sound observations.  That he spent a lot of time being tough and independent.  That he usually keeps him emotions under control.   Something that Ilsa turns totally upside down because he has never met anyone like her.  And she was also as far from the worldly, sophisticated women he is used to.
Ilsa is one wild child, totally innocent of anything outside her mountain world.  She's a free-spirit who loves nature, swinging in the treetops, animals and her sisters. I loved this character!! She is non-violent unless she is cornered by an animal or needs to hunt for food.  Oh and yes if someone she cares about is threatened.  More than once when defending someone the warrior or feral look came out of her expression.  That was so well described and Mitch ought to know about it because she saved his skin more than once.  Ilsa and her knives yes, that added some interesting moments for sure.
The only downside I felt was the over mentioning of the three different sister's skill sets and fears.  I slowed the story a couple of times although all of it was an important part of the story.  In my opinion it could have been pulled back a bit.
However, I just had to give it high marks because the mysteries in the story, twists and turns and the people were so good.  And the intensity of the chase takes off time and again especially towards the end!
A very satisfying H.E.A. brings it all to an end for now and for them.  There is still one other threat out their for the Warden family (probably completed in the next book) but at least this one is over.

''I voluntarily read and reviewed an advanced copy of this book. All thoughts and opinions are my own.”
Posted by Flame at 3:59 PM