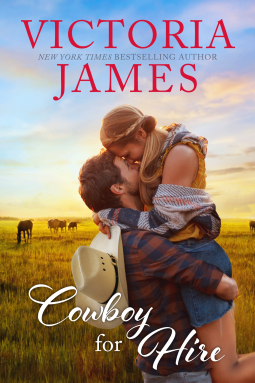 When a shy woman inherits a ranch, she’ll have to find an inner strength to succeed—and open herself up to love—in this heartwarming novel from New York Times bestselling author Victoria James.
Sarah Turner has led a very sheltered life. So when her parents pass away tragically, suddenly she’s left in charge of the family ranch with little know-how but plenty of will to keep it afloat. Determined not to lose her parents’ legacy or her newfound independence, she needs a hero fast—not to save her, but to show her how to save herself. But she’s unprepared for the ruggedly handsome cowboy who answers her ad.
“Cowboy for Hire,” the ad said, and Cade Walker is quick to respond. Betrayed as ranch manager by his former boss, he’s looking for a new place to put down roots—without the pressure to prove himself again. Except when he meets his new boss, it’s clear he’s not only there to run a ranch but to also teach Miss Independent how to run it. But as they struggle to make the ranch flourish, they’ll both need courage if they hope to find a family...together.   AMAZON LINK
3 STARS

I had high hopes for this book but at best all I can say is that it had it's moments and then at times it was sunk in a lot of repeated memories.  It left me with mixed feelings.  Oh, there's nothing wrong with them having their own painful emotional memories but at times it felt repeated a bit too much.  In fact, at times it felt like it kind of drowned out some of the romance between the two.  Because I often wasn't feeling it.
Both Sarah and Cade were good people, no mistaking that. Cade carried the pain of always having to prove his worth to someone or else he was kicked to the curb.  Sara was kind of like a young woman who was so overprotected that she was stunted.  The only person who really had cared for her was the family's longtime housekeeper.  Who by the way, I really disliked for a very long time.  Yes, yes I know her actions were because she loved Sarah like a daughter.
So I guess the final answer is yes, I enjoyed some of the humor, and Cade's friends but it was just missing something.


"I voluntarily read and reviewed an advanced copy of this book. All thoughts and opinions are my own.”
Posted by Flame at 2:55 PM