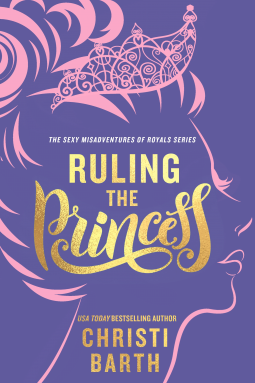 I’m thrilled that my first trip back to my homeland, after years in exile, is for an assignment from the prime minister. Even better, the job's to put Princess Genevieve in her place...by cutting off her cash flow. Spoiled royals—even drop-dead gorgeous ones—don't do anything to deserve their wealth and status. Hell, they don't do anything. She's fighting me tooth and nail, of course. The only way to stop her arguing is, well, to kiss her.
And I can't seem to stay away from her. Now, I see a whole different side to the princess—and not just because I've gotten her clothes off. But I was put on this assignment for a reason… There are those outside the castle who want to see the princess discredited and push their own agenda, and I may have just given them all the ammunition they need.

Each book in the Sexy Misadventures of Royals series is STANDALONE:
* The Princess Problem
* Ruling the Princess
AMAZON LINK
4 STARS

Both  Genevieve (Genny) and Theo are good main characters.  And I have to say that at first I really disliked Theo a lot.  That chip on his shoulder was HUGE!  His hate for anything royalty and everything Princess Genevieve was front and center.  Yes, he has some cause for some of it but you won't find out the why of it till much later in the story.
Other people in the story were interesting as well.  Like Prince Christian (heir to the throne) Simon Brunner who is Theo's best friend.  Simon adds fun, humor and some common sense his friendship with Theo.  Simon is also a pretty smart accountant as well.   Kelsey is the long-lost sister who has been found now and trying to be herself in her new role as princess.

Genny and Theo going from enemies to more was good to watch as they begin to admit their attraction.  So, good romance?  Check.
There's some underhanded stuff going on that adds drama to the story and at least a couple of surprises.  But the underhanded stuff isn't coming from Theo because he's a straight arrow.
The story comes to a satisfying ending with a quick look into the next story in the series (Book #3 that's about Christian and Mallory).  Looks like it could be interesting .