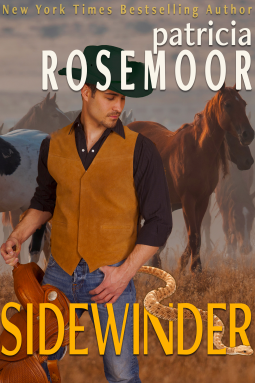 When detective Libby Tate returns to the lawless New Mexico town where her father and brother were murdered, she has a single clue—an S carved into the earth. And a single suspect—Reies Coulter. She soon learns that no one in Sidewinder can be trusted, least of all the mysterious rancher. After meeting this human sidewinder in the flesh, Libby is targeted by someone who wants her dead and is torn between her suspicions and desire.  AMAZON LINK
4 STARS

Whenever I see a book by Patricia Rosemoor, it gets my attention.  I have read quite a few of her books and enjoyed them.  Of course, some more than others.  But still it was worth checking out.  And I wasn't disappointed, it was intense like so many of her books.
Reies and Libby both give their own P.O.V.'s which I enjoyed.  It wasn't done in a blow by blow rehashing way by each character that I dislike.  So another point right there.  Libby is tough and determined to find the truth about the murder of her father and brother.  She also places herself in danger by just poking her nose into those mysteries.  Someone would rather she be dead than complete her mission.
Reies is intense all on his own.   But he's also been hurt deeply by others and keeps himself guarded to prevent more.  Both of them have their own pain but their attraction is also pretty strong.
There really a good sense of world building especially when it came to the ranch, town and the local surroundings.
This town reminded me of the Wild Wild West and that was shown really well.  There were really good people in the town but they were terrified of all the bullies who had a choke hold on the area.  It was made clear that there really was no law in the area. Add to that the fact that "Outsiders" were NOT welcome.  They didn't need to put out a shingle with that warning.  It was made clear as day.
Pilar, what a piece of work she was...But then again she's not the only one.
All in all this was a good story  with romance, and plenty of suspense, and action.

"I voluntarily read and reviewed an advanced copy of this book. All thoughts and opinions are my own.”
Posted by Flame at 9:32 PM