BOOK REVIEW- The Most Eligible Lord in London by Ella Quinn * 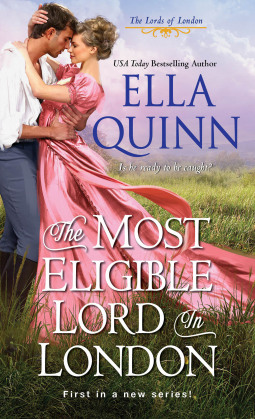 In this captivating new Regency trilogy, bestselling author Ella Quinn picks up where her beloved Worthingtons series left off, as three Lords of London discover true love at last . . .

Handsome, rakish, incorrigibly flirtatious—Fredrick, Lord Littleton, is notorious. Lady Adeline Wivenly is resolved to keep him at arm’s length during her first Season—until she overhears another woman’s plot to trick him into marriage. Even a rogue is undeserving of such deception, and Adeline feels obliged to warn him—only to find herself perilously attracted . . .

In the past, Littleton’s charm nearly got him leg-shackled to the wrong woman. Now he’s positive he’s found the right one, for Adeline is everything he wants and needs in a wife. Her sense of justice is so strong she agrees to help him despite her mistrust. But can the ton’s most elusive lord convince the lady he is finally serious about marriage—as long as she will be his bride? AMAZON LINK
3 STARS

There was a good foundation for both  of the main characters, their families and friends.  But the story was SO Slow....I was past the 40% on my kindle still waiting for something, anything to really happen.
While it was nice to have dual P.O.V's from both Frits and Adeline, for me the story was JUST okay.
On the plus side I guess you could say that it was somewhat charming at times, there was a bit of humor but it was still somewhat predictable.  The only real twist I saw came when a secret was exposed about another man who was also pursuing Adeline.

I did think that the eBook cover was very attractive.

"I voluntarily read and reviewed an advanced copy of this book. All thoughts and opinions are my own.”
Posted by Flame at 6:55 PM