BOOK REVIEW- THE VISCOUNT AND THE VIXEN 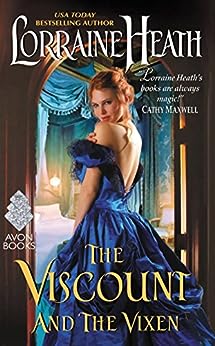 Love begets madness. Viscount Locksley watched it happen to his father after his cherished wife’s death. But when his sire arranges to marry flame-haired fortune hunter Portia Gadstone, Locke is compelled to take drastic measures to stop the stunning beauty from taking advantage of the marquess. A marriage of mutual pleasure could be convenient, indeed . . . as long as inconvenient feelings don’t interfere.
Desperation forced Portia to agree to marry a madman. The arrangement will offer the protection she needs. Or so she believes until the marquess’s distractingly handsome son peruses the fine print . . .and takes his father’s place!
Now the sedate—and, more importantly, secure—union Portia planned has been tossed in favor of one simmering with wicked temptation and potential heartbreak. Because as she begins to fall for her devilishly seductive husband, her dark secrets surface and threaten to ruin them both—unless Locke is willing to risk all and open his heart to love.   AMAZON  4 STARS

An interesting cat and mouse story.  A very heated one, with plenty of marital sex. A pretty detailed one.  So this story isn't for you, if that is a problem.  It isn't all sex though, there is a story to be found in it, which I did like.  Early in the book, Portia had several conversations that made me wonder about her.  No she wasn't a virgin,  but even as a widow, she said some things to Locke that seemed so wildly unacceptable.  Yes, she said them to challenge Locke, but it seemed like only a woman of the streets might have said.  But she was also more than that, she did have many redeeming qualities as well.  Portia was something else, going toe-to toe with Locke the minute she meets him.  Even afraid, she confronted what she needed to.  These two were made for each other, although in the beginning there was no way that they planned on love entering in.  to the bargain.  But attracted to each other?  Yes, from the very start.  I liked Locke's father even more as time went on, and his character was so much more than the madman that some people thought him.  Not only did he have more depths, so did the story and the other people in it.  Portia and Locke, both sure did.   And some of their conversations were not only funny but also incredibly blunt!
There is a journey to the H.E.A. for Portia and Locke but the emotions of the story come through loud and clear.
Good Epilogue too
Posted by Flame at 7:42 PM