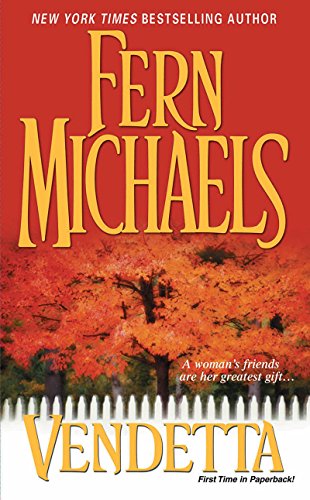 Once upon a time there were seven very different women who had been broken but not beaten by life. In those tough days of healing, they became the Sisterhood, a group of devoted friends who vowed to change their lives, empower themselves, and be there for each other, no matter what. Now, they're ready to answer the call for the woman who started it all, Myra Rutledge.
Five years ago, Myra's pregnant daughter was killed by a hit-and-run driver--the playboy son of an ambassador with diplomatic immunity. Myra was left to grieve while the murderer was free to return to his lavish lifestyle with no fear of ever having to pay for his crime. But not for much longer. As the air turns crisp the Virginia hills around Myra's lovely old farmhouse, the Sisterhood has gathered for a little creative planning, and what they have in mind is a gift for Myra of long-awaited and very sweet revenge. AMAZON.  4 STARS

Brilliant and at some times squirm worthy.  The squirmy part of the feelings came in when I read what the women did as his punishment.  Ouch, painful.  Cunning, well planned but brutal and life-long in its effects.   The details could have been worse, I guess and I'm just glad that they weren't more detailed.  The rest of the story, critical planning of the mission, the relationships were close and very well written.  It was good to see the "ladies" of the sisterhood back together, both personally and as a team.  Even Jack, the ex-fiancee of Nikki's was a good part of the story.  He was relentless and very tunnel visioned when it came to trying to catch the sisterhood.  He was diving others around him crazy with his bull dog tenacity.  He had theories, which while they sounded wild to others, they were often so CLOSE to the truth it was almost scary.  He had gut feelings about these things and he was  pretty good at connecting the dots.  He just couldn't seem to get his hands on any real proof.  His partner in their new detective business tries to talk him into being reasonable but most of the time can't slow him down.  So of course Mark gets drawn into the craziness too.
In this story, it was said that this was their most dangerous, intricate mission because part of it involved going into another country, China.

The only thing that I wasn't as keen on was the ghost(?) of Myra's daughter Barbara "talking" with Myra and sometimes Nikki.