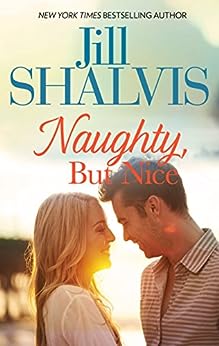 Cassie Tremaine Montgomery: the stunning lingerie model with a tough-as-nails attitude and a sheriff in her sights. Sean "Tag" Taggart: the sexy-as-sin sheriff who is more than willing to play Cassie’s game…his way. Cassie intends to use all the seductive powers she has to entice Tag as part of her revenge on her hometown. Tag, however, isn’t cooperating. He’s more than willing to set the sheets on fire with her, but he’s asking for more than just sizzling sex… He knows she’s not as tough as she pretends. And he knows she cares about him—even if she won’t admit it. That’s fine. He’ll just turn up the heat until she concedes there’s more between them than this red-hot passion.  AMAZON   4 STARS
Originally published in 2002.

I think this might have been the first time that I have read anything by this author but it won't be the last.  It definitely kept my interest and I really liked both of the Main Characters.  But I also must say that the title for this book is right on.  It IS Naughty but nice (too).  The picture of the eBook I felt was in need of an update though.  The guy and his outfit just didn't feel like it fit the story.  Just sayin'.  This book should have come with a bit more warning though.. it should have a label saying "Hot" on it.  There will be pages of sizzling sex (like was mentioned) but it doesn't skip on the emotional parts of the story either. If you don't want to read the sex parts either don't buy this book or skip some on it.  The thing is that there is a tenderness and caring from Tag when it comes to the sex part that is endearing.  Cassie isn't used to that and it is terrifying to her.  Some of the conversations between the two of them was  over the top at times.  I also found myself smiling more than once.  Although Tag is strongly drawn to Cassie, he is NOT a push over either.  Both Cassie and Tag were tough as nails in their own ways but the reader gets a really good look throughout the book at how Cassie got her attitude.   I liked when we got to see their vulnerabilities and their strong personalities. After reading about Tag and his yearnings it was easy to want both of them to have their H.E.A. together.  They will get there but oh, it's going to be a often bumpy, sometimes funny, sometimes tearful ride.
Cassie had quite the interesting short list of "To Do's" made from the pain of 10 years ago.  All of which she accomplishes but one came with a surprising twist for her.  It doesn't exactly turned out the way she planned all those years ago. It actually turns out better.
Her cousin, Kate was a smile worthy character as well and I would have liked to hear more of her story too.  Especially the one about her and Jack.   The other people in the town added interest too.

There is also a excerpt from the book, "Cowboy after Dark" included.
Posted by Flame at 8:35 AM