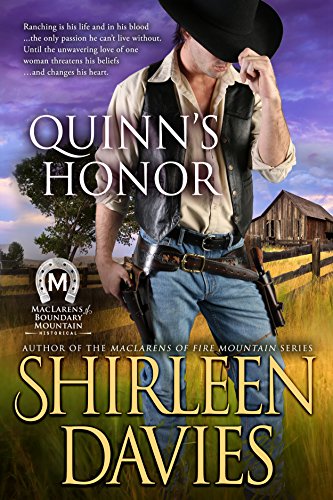 Quinn MacLaren has one true love…Circle M, the family ranch. He makes it a habit of working hard and playing harder, spending time with experienced women who know he wants nothing more than their company. He buries the love he feels for one woman deep inside, knowing he’ll never be the man she needs.
Emma Pearce is a true ranch woman, working long hours to help keep the family ranch thriving. Feisty, funny, and reliable, she’s the girl all the single young men want—after they’ve sown their wild oats. Few know Emma has her heart set on one man. A man who may never grow up enough to walk away from his wild ways and settle down.
When tragedy strikes, Quinn’s right where he doesn’t want to be—as temporary foreman of the Pearce ranch. Stepping in to fill Big Jim Pearce’s shoes isn’t easy. Neither is keeping his feelings for Emma hidden and his hands to himself. Honor-bound to do what is right, Quinn meets the challenge, losing Emma’s friendship in the process.
Adding to Quinn’s worries, something sinister is working its way through the thriving town of Conviction. Unforeseen forces are at work. Debt builds, families lose their ranches, and newcomers threaten to divide not only the land, but the people—including the Pearce family.
As events unfold, Quinn faces the difficult challenge of keeping his feelings for Emma hidden and his honor intact. Doing what he believes is right couldn’t feel more wrong.
After all, what’s a man without honor?
Quinn’s Honor, book three in the MacLarens of Boundary Mountain historical western romance series, is a full-length novel with an HEA and no cliffhanger.   AMAZON


I like the way the book opens, action right out at the start.  It does slow down for a while as we get acquainted with the town and the families.  It will pick back up after awhile.  Prepare for a fairly large cast of characters.  That threw me off a time or two, even though I found each one interesting. Quinn's family was fierce, loving and really close to each other.  But they also did their best to let each member make their own choices even when it wasn't exactly what they, as a family wanted.  One of those choices had to do with Brody, who loved being a lawman and the family wanting and needing him back on the ranch.
Emma was feisty and loved everything about the land, and the ranch.  Her favorite thing was horses and that is where her passion lays, second only to Quinn.  Emma was relying on the promise her father made about her co-running the ranch with him.  When he reneges on that promise, the usually good, obedient daughter explodes. I'm not going to say anything more about that because I don't want to spoil it for other readers.
The longing between Quinn and Emma goes on for quite a while.  Quinn is so stubborn.  He is crazy about Emma but he is also terrified to love and then lose someone that he loves. That makes things pretty difficult for Emma, because Quinn keeps sending mixed messages and it is tearing her apart. Yes, that definitely made me want to slap him right in the back of the head.  I understood where he was coming from but also one of his family members had said when Quinn made a decision he never changed his mind.  So, you can see how dicey it was going to be with Quinn and Emma.  Those who weren't the only ones struggling with being attracted to each other and not getting anywhere with it.  There are two other wannabe couples struggling too.  But don't worry, there are some successful couples who are working it out together.
If you think its only about the M.C.'s romance struggle, its not.  Like the book blurb said, there's some dangerous, shifty things going on.  So, there will be some twists, turns and some gun shooting action.

There is a HEA for Quinn and Emma and this book can be read as a stand alone.  There are also some things that are left open for future adventures.


"I was given a free copy of this book in exchange for a review."
Posted by Flame at 9:21 AM