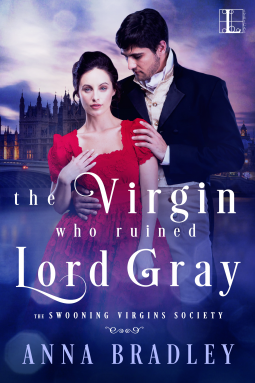 Behind the doors of the Clifford Charity School for Wayward Girls there lies a secret society of brilliant, fearless women who are bringing justice to London’s most corrupt aristocrats, one nobleman at a time…

Other young ladies might occupy their spare time with drawing or needlework, but Sophia Monmouth spends hers scaling rooftops and shadowing suspicious characters. Her objective: to gain information that will free a friend wrongly accused of murder. She hasn’t bargained on being spotted and followed back to the Clifford School by a mysterious earl who holds almost as many secrets as she does.

Tristan Stratford, Lord Gray, earned the nickname the Ghost of Bow Street because no man has ever escaped him. Sophia—all soft curves beneath her disguise—is a unique challenge. Determined to learn the truth about the Clifford School, he joins Sophia in a scheme that leads from Newgate’s cells to the pinnacle of power. But when desire is at odds with justice, succumbing to temptation may lead them both into the heart of danger. . . .  AMAZON LINK

I loved every bit of this story.  It was emotional, quirky, with plenty of danger but it was also funny at times .  It was clever with really good main characters.  And it had some good supporting people as well.  Lady Clifford  the founder of her own unorthodox school  definitely fit the bill of a interesting secondary person.

"No Unnecessary risks " is almost a mantra for Sophia. It's something that Lady Clifford says often to Sophia. But no matter how hard she tries, it's something that she unwittingly violates, time and again.  But she is a really clever, inventive woman. So it's hard for her not to push the envelope.

Stuffy, rigid by the book , the law is the law definitely defined Tristan.  Well, until Sophia burst into his world and upended it. It doesn't look like it at first but as the story unfolds we see that both Tristan and Sophia work for justice. Sophia sees it differently than Tristan though.  She sees it through the eyes of it not always working fairly for everyone.  Especially if you're not a part of the entitled aristocratic group of people. I really enjoyed the interactions between the two of them.

The ending of the story was good even though some villains didn't get the exact punishment that they deserved.  But our "heroes" definitely got what they deserved.  A very nicely done H.E.A. that was uniquely done in their own style.

After reading this book and enjoying it so much, I will be on the lookout for more books in this series.  Absolutely, because it does say this is Book #1.