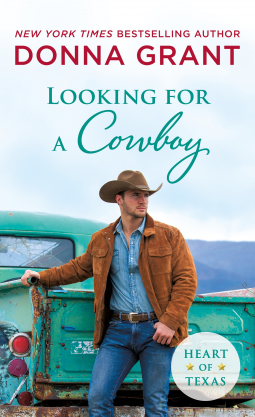 A cowboy finds love in the most unlikely place in New York Times bestseller Donna Grant's newest Heart of Texas novel, Looking for a Cowboy.

A beautiful stranger has come to Clearview, asking questions that are nobody’s business. Cooper Owens also wasn’t born yesterday. He knows that this out-of-towner is hiding a dark secret of her own. Much as he knows he should head in the other direction, he can’t make himself turn away. . .

P.I. Marlee Frampton always wanted to lead a nice quiet life, working as a cop in her local police department. But that dream came to an end when her sister was murdered—and her baby kidnapped. Now Marlee’s come to Texas to investigate the Harpers, who may be linked to shady adoption agencies. Cooper can’t believe that his friends could be involved in anything so sinister...and soon he makes it his mission to help Marlee discover the truth—and keep her safe in his arms.  AMAZON LINK

This was an intense, emotional story . It addressed a pretty serious danger that keeps being done over and over again.  Kidnapping women, murdering them so that they can steal there babies?  It's a gruesome, cruel crime so no wonder Marlee is relentless in perusing them.  Her twin sister's murder and the theft of her niece started her on this path but she began to release she has a gift when it comes sorting through the clues.

Some of the emotion also comes from when Marlee and Owen find themselves strongly drawn to each other pretty quickly.  They both have been on their own for some time.  Marlee of course has had no time to date, putting all her passion into her investigations.  Owen hadn't found anyone that grabbed his attention until he met Marlee.  Then he just knew even though he wasn't sure how a relationship could work out.  It made for a good romance as they begin to learn about each other.

There is plenty of other people in the community of family and friends that surround Owen.   At first, I was getting lost from time to time when it came to sorting them out. However, Cooper's lifelong friend Jace didn't fall into that category.   They were so close that they were more like brothers than best buds.  By the time the story was finished I ended up hoping Jace gets his story next and hopefully a love of his own.  Either a  recovered love from his past  ( which was mentioned that there had been one) or a brand new one.

The whole story was intense, with surprise after surprise.  And one of the best ones comes at the close of the book.  Quite the dramatic ending.  A H.E.A ending was also welcome as well.