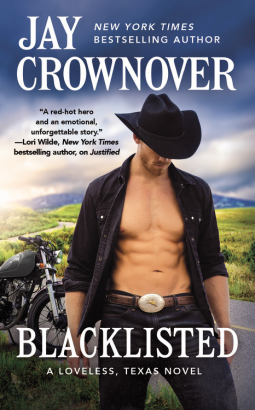 From the New York Times bestselling author of the Marked Men series comes an irresistible and suspenseful romance between a doctor who plays by the rules and the outlaw who breaks them in order to protect her.


Dr. Presley Baskin has always lived a quiet, calm life. Unfortunately, nothing about her life in Loveless, Texas -- especially not the wild, rowdy, and impossibly close-knit Lawton family who've claimed her -- is quiet or calm. Which is how loner Presley finds herself roped into patching up local bad boy Shot Caldwell against her better judgment. Presley wants nothing to do with the dangerous, brooding leader of the local outlaw motorcycle club. But when someone starts stalking her, Shot is the only person she trusts to help. Plus he owes her one . . .

Palmer 'Shot' Caldwell has always known his life isn't made for relationships. At least until shy, secretive, Presley reluctantly pulled a bullet out of him. He's oddly protective of the pretty doctor, so when she comes to him  for help, hard-hearted Shot suddenly realizes there's nothing he wouldn't do to keep her safe.   AMAZON LINK

It all starts out with a really great dedication that I loved!  It was a great encouragement that its better to stand out  than to fit in. But most important, be yourself. There was more but that was the gist of it.  When I read that my first thoughts were, ''This sounds promising.  I sure hope the story is as good as this dedication!"  And I can truthfully say, it was.  I really enjoyed the story and think I've found a new- to -me author to follow.  I will be looking to read more of her stuff.

Both Presley and Shot were compelling main characters who couldn't be more different from each other. Makes you wonder how they could ever be a good fit. Sure, the attraction was there.  That was not even a question.  But as the story goes on, some interesting similarities crop up that you wouldn't think would.  One thing that they do have in common is that they have both been outsiders in society.  The reasons are different but it came as a surprise to me when it became clear that they BOTH had been blacklisted in some way.  I really liked that and the unpredictability of not only the story but also in both of the M.C.'s.

Looking at Presley you see a woman who had no family left and she was used to being a loner.  She is someone who has carried a pretty heavy load all on her own for years.  That made her independent but also not used to having anyone to lean on.  She even owns up to the fact that she doesn't know how.  She doesn't know how to do the family thing either.  But she's getting a crash course in it when her quiet life explodes with her newly found Lawton family.  I think the author did a great job of showing just how jarring that was to Presley.  Her half sister Kody played a big part in the story.  After awhile she keeps refusing to allow Presley to shut her new family out.  Kody had a heart as big as Texas and her personality was just as big too.

Shot lived his life by his own rules.   It often makes him butt heads with the law.  But he does live by his own code of honor.  So, I guess that made him a dark hero in the story.  Still, he had quite the way with Presley that was surprisingly charming.  It made me smile when it came to Shot and Presley doing the "you owe me a favor" (a favor for a favor) game.  The two of them do end up heating things in the bedroom but it's not right away, which I also liked.

Ashby was quite the villain that you don't have to wonder about.  Is she evil or not? Oh, yeah,  you know it early on and her manipulations and hateful actions just keep being revealed.  Her hatred for Presley runs long and hard and without any limits.  It made me wonder when and how she would get caught.

The twists and turns in the story kept me involved and often on the edge of my seat.  Not only was Presley in danger but Shot had some enemies too.  They also have a part to play in some of the danger.

I also really enjoyed the Epilogue that was included.

One thing I will say was the eBook cover felt a bit  like it didn't quite fit my image of Shot.  At least on the cover at this time, he looks more cowboy than a leader of a biker club.  Not a tattoo to be found anywhere.  But I probably shouldn't make a big deal about that because the picture did cause me to stop and take a closer look at the book.