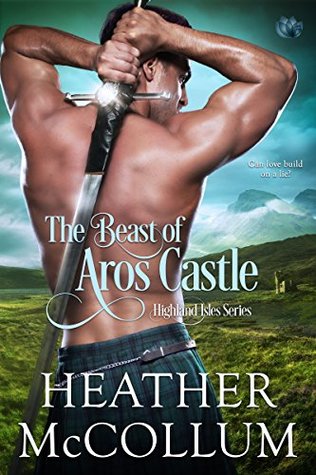 Ava Sutton is on the run from a dangerous man and makes her way safely to Scotland. Masquerading as a titled, English lady, she must convince the darkly handsome chief of the Macleans of Aros to wed her before she is tracked down.

Tor Maclean, the new chief of Aros Castle, has sworn off marriage. Despite his efforts to scare away the Englishwoman his father arranged for him to wed, Tor is nonetheless drawn to her passion and beauty. But he doesn't know if he can forgive the untruths that have come to light for a chance at a once in a lifetime love...  AMAZON LINK

You can almost taste the danger that Ava and Grace face in the very opening chapter of this book.  It made for quite the dramatic start. It was not only dramatic but kind of scary too. Vincent was revealed right in that first chapter as a pure evil villain that they were trying to escape. Add to that to the fact he had some power on his side and he was a clever evil guy.  Ava and Grace were really good main characters and had me rooting for them both really quickly.

Ava was quite the clever woman and some of her improvised plans started out good.  It saved both herself and Grace many times. And Ava will do just about anything to protect Grace, they are SO close. It's almost like they are sisters regardless of their difference in status. It also landed them in some unexpected things that go sideways too.   This was going to be another of those things that will go sideways.  But Grace and Ava really had no other choice.  And Ava was really good at thinking on her feet.  I really liked her a lot.

Grace was quite the gentle lady, she also was fairly quick to follow after Ava and her adventures.  She just about faints when she meets The Beast.  There is no way she can marry HIM.  But it was also good to see Grace begin to toughen up a bit as the story goes on.  She also starts to come into her own.

Tor being titled with the name"The Beast of Argos Castle" was really misguided.  Yes, he is a tough and fierce warrior but he is also so much more.  And Ava finds ways to tap that so much more.  And he fights her all the way until suddenly he just can't.  Their battle of wills was interesting and often funny.  They made me smile more than once.

This story kept me involved every step of the way.   It was at times unpredictable, mixed with some twists and turns.  It also had some interesting secondary people in it and that includes Tor's mother Joan.  Is there a H.E.A?  Yes, and I liked how the story ended.  It also made me want to read more of this series.  Bring on the stories for Grace and also Tor's sister,
Mairi Maclean.