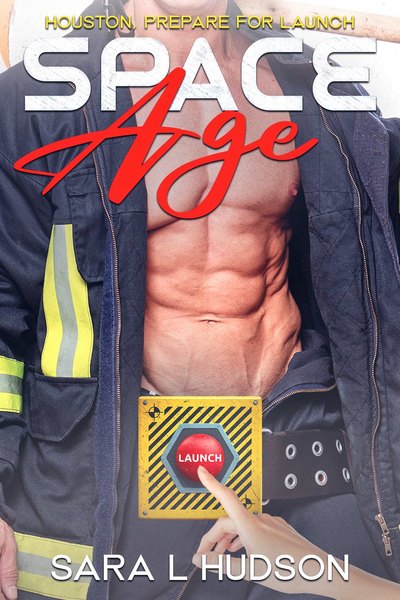 NASA Flight Surgeon Dr. Rebecca Sato has earned her dream job. Now she’s ready to explore the next frontier…having a family. While responsible for the health of astronauts who fly through space in the International Space Station, her feet are firmly planted on the ground.
But at thirty-six, the men on her radar are either intimidated by her intellect or not interested in having kids. So she devotes her spare time and energy to the local animal shelter.
At twenty-eight, Houston Lieutenant Firefighter Ryan Cassidy knows he’s an old soul.
Tired of girls his age who only crave a quick hook-up with a good-looking fireman, he’s ready to settle down with a wife, kids, maybe a dog.
When a fire at Johnson Space Center threatens NASA’s medical building, Ryan rushes in, ready to take charge. But he’s blindsided by a calm, compelling doctor who’s already in command of the evacuation. While the fire is easily contained, Ryan can’t say the same for his heart.
Attraction fans the flames, but dating a younger man is not in Rebecca’s comfort zone. Determined to synchronize their orbits, Ryan volunteers to pose for her animal shelter’s charity firefighter calendar. Between Ryan’s abs and his love for animals, the wall around Rebecca’s heart starts to fall. Will their age difference be too much to overcome? Or will they achieve a five-alarm lift-off?
AMAZON LINK
4 STARS

This book has good main characters with a few good sidekicks too!  Age is a HUGE issue for Rebecca but she also has some valid reasons for it.  Being older that Ryan is something that she is NOT comfortable with. Ryan has his work cut out for him. Ryan is all in when he meets Rebecca, it happens for him pretty quickly. He admires her confidence, discipline, and smarts when he meets her on the job.  That first meeting in itself is unusual.  Oh I almost forgot to mention he admired how good looking she was too.  And they find that they share the love of animals too.
I liked how Ryan was a good guy who got ribbed by people he knew because he wasn't the norm when it came to dating.  His goals were different.  He didn't want to play the field, he wanted to settle down with The One.  He was also described as an Old Soul.   And the scenes of Ryan with his nephew?  Oh yeah, sweet!
Rebecca's unofficial sidekick is hysterically funny.  Hysterically funny and totally without a filter too.  Jules is a Astronaut under Rebecca's supervision.  But nothing can put a stopper in her amusing but TOTALLY inappropriate ( and sexual) comments.  Rebecca may be the supervising doctor but Jules is not one smidgen afraid to get in Rebecca's business. In fact she is the one who gives Rebecca a push towards Ryan.    For her own good of course.  It does lead to some pretty funny adult humor.  Even as she shocks you it's still hard not to like her. And I it looks like Jules does get her own story in another book (there was a peek at it).  That should be good too.
There is also a H.E.A. conclusion happening for Rebecca and Ryan.

I got a copy of this book free from the author for signing up for her newsletter.  I found out she has a page on Facebook  and you can also go to her site as well:  www.saralhudson.com