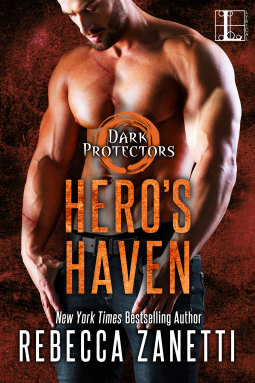 After years of struggling, Haven Daly has finally accepted that she’s nuttier than a fruitcake. Why else would she see visions of a beautiful but tormented male every night . . . and actually believe she can talk to him, even feel his touch?  But thanks to those dream journeys, she can paint images nobody else on earth can duplicate. In each brush stroke, she captures the blatant masculinity and raw desire in his eyes that promise he’s coming for her…and soon.

She’s the light that keeps him going. . .

Quade Kayrs has already suffered a lifetime of pain and torture. Completely isolated, he kept his sanity  thanks to one beautiful female, a vision with kind emerald eyes. In the end, her soft voice led him out of hell. Now, naked and alone, he’s in a strange world that bears little resemblance to the one he left behind. All he knows is Haven.  All he wants is Haven.  His final mission? To protect her from the evil hunting them both—whether she likes it or not . . .AMAZON LINK
5 STARS

Bang!  Dramatic start right from the beginning.  Pulled me in like right now.   And it kept right on going on the Intensity Scale.  The emotions of the people in the story went high on that scale as well.
I always keep an eye out for this particular author and the books in her series.  And once again I was NOT disappointed.
Haven was quite the complex character, having quite the unusual childhood and background.  That unusual childhood also helped get the skills that she needed now.  Not supernatural ones but things like knowing how to pick a lock and how to survive on the run. Not only was that unusual but also her heritage was as well.  Something that she knew almost nothing about.  There is an unexpected twist waiting for the reader later on in the book about that.  But there were plenty of other people that were on her scent.  About the time she thought she just might have some breathing room, another threat appeared.
Quade, what a guy.  He's suddenly flung into a world that he never could have imagined.  A modern world with contraptions and weapons that kind of boggle his mind.  And the language in this world requires some brushing up on as well.  Quade also has no idea on how to contact his family, if any of them are around to contact.  That makes for some interesting times.
Haven's drawings are prophetic genius and you can almost feel their impact as they are described in the story. Speaking of impact, the world building was pretty well done I thought.

Having read some of the other books I knew some of the other people in the story.  I was also pretty sure that the Ultimate Enemy wasn't going to be overcome yet.  Many things were taken care of but the Ultimate Enemy (Ulric) has only been held at bay for now.  That is a fight for another day.
I think that if this is only as far as you want to go in this series you could still enjoy this book and stop right there and be satisfied.  However, if like me you could continue on and see if Ulric gets his comeuppance in the next book.

“I voluntarily read and reviewed an advanced copy of this book. All thoughts and opinions are my own.”
Posted by Flame at 10:12 AM