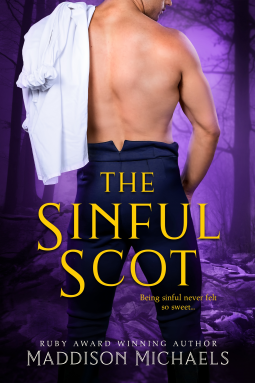 Constance Campbell, the Duchess of Kilmaine, once believed that all she needed in life was a duke. But everything unraveled when she realized her perfect husband was a perfect monster. Now broken beyond repair, she hides her misery behind a perfect Society mask...even from her childhood friend, Alec.
Dr. Alec McGuiness reluctantly finds himself back in Scotland, and checking up on the only woman to ever get under his skin, Connie. After she spurned him many years ago, he knows his humble life as a doctor could never be enough for her. But when the Duke of Kilmaine is murdered in cold blood, with Connie sleeping right next to him in bed, Alec knows he must protect Connie at all costs from those who would frame her for the duke’s murder.
Now on the run, Connie feels a freedom she only ever dreamed about, and an unexpected attraction to the man who is keeping her safe. But even if they can win her freedom and clear her name, could she ever open her heart up to someone again?   AMAZON LINK
4 STARS

This book didn't contain your usual run of the mill hero and heroine.   Connie was a woman who let her need for her mother's love and approval lead her to a dangerous decision.  That being, marrying Duncan, the Duke.  Oh, he was handsome, and charming and she was young and innocent.  She hadn't seen the monster under all that facade.
Both of the main characters had suffered betrayals.  Which makes this quite the emotional read at times.  Connie had another betrayal other than her abusive husband.   Her mother had no concern about the truth of Connie's marriage or the danger she was in.  It was all about titles, image and prestige to her.  And at one of Connie's darkest times, her mother shows her true colors.    Alec had his trust destroyed by several people beginning with his father, mother and later his brother Ian. There is more to the story though when it comes to Ian.
I do have to say that at times this story seemed to slow down and I didn't enjoy those times as well.  It was mainly because each of the M.C.'s were hashing and repeating the same issues over and over that plagued them.
But....
When Connie and Alec go on the run things get really interesting, as more danger chases even closer behind them.  At times, enemies are even getting a bit ahead of them too.
There is a mystery woman shielded in black who really is a mystery.  At about 77% on my kindle I began to finally suspect who she could be.  And it was finally confirmed but with a huge surprising twist that I never saw coming! I really liked that!
In the beginning, the romance was more about Connie and Alec regaining their friendship and moving past old hurts and learning to trust again.  They do become more tender with each other even as they try to protect themselves from further hurt.  The attraction is still there between them and they can only fight that for so long.

I finally decided that the book did deserve a 4 star rating on Amazon because of the chase, mysteries and twists towards the end.

"I voluntarily read and reviewed an advanced copy of this book. All thoughts and opinions are my own.”
Posted by Flame at 11:08 AM