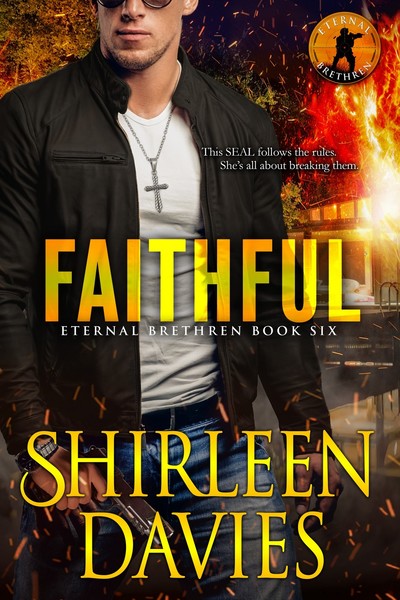 Faithful is book six in the Eternal Brethren Military Romantic Suspense Series by best seller Shirleen Davies. It is a stand-alone, full-length novel with no cliffhanger and a guaranteed HEA.


His life is built on secrets.
Her love demands complete truth.
What will happen when duty and desire collide?

FAITHFUL, Book Six, Eternal Brethren Military Romantic Suspense Series
Dylan “Moses” Wright believes in God, his undercover SEAL team, and the belief his work is critical to protect the country he loves. Wary of a relationship with any woman, he’s surprised at his swift attraction to the new veterinarian in town—the daughter of a notorious cartel leader his team is sworn to take down.
Victoria Stanifer Quintero has faced her share of setbacks. Adopted by a prosperous leader of a vast Mexican business empire, she and her sister have been provided every opportunity. But the constant niggling at the back of her mind warns her Armando Quintero isn’t what he seems. Worse, Dylan Wright, the man she’s fallen in love with, is determined to do all he can to discover her father’s secrets and use them to destroy the man he believes is a cartel kingpin.

But Moses also is a man of many secrets. Riding with what she believes to be an outlaw motorcycle gang, she’s as unsettled about him as she is about her father and brothers. The code of silence he and the Eternal Brethren live by requires he tell her nothing about his job or the role he plays in the MC.

Tori has learned to live with the deception of her family. Allowing her heart to be captured by a man who insists on the same is no longer an option for the independent, high-spirited veterinarian.

Frustrated and vulnerable, she finds herself faced with a tough decision.

A series of threats pose a bigger risk than allowing the biker to protect her. When Moses refuses to leave her side, she must fight not only for her life, but the growing attraction to a man she knows to be dangerous to her heart.  AMAZON LINK
4 STARS

There is plenty of action, mysteries, danger and romance in this story.  There is also quite the large cast of people as well.
Although I liked Moses/ Dylan he sure sent out a lot of mixed signals to Tori.  It just added more confusion in her relationship with him.  She was never really sure for quite a while where she stood with him.  And the secrets he had to hold from her wasn't helping.    Although that confusion on both their parts didn't keep them out of each other's bed.  There were some strong feelings going on between them that wasn't just about their sexual need.
There is plenty of emotions some even coming from some  surprising places.  Some hard choices will have to be made.  You just might be surprised who has to make the final one.
One thing that didn't seem right was when Tori calls in a delivery takeout order using her credit card ?? And Moses watched her do it and it was okay with him?  They were in a safe house for crying out loud. In this digital age, they weren't concerned that her location would be tracked?
There is a good twist coming, that will surprise as the story comes to a close.