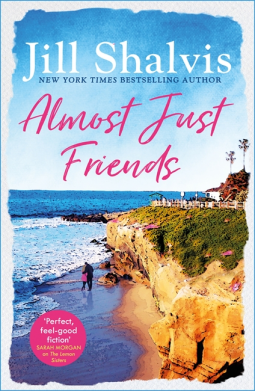 Sometimes the life you want is closer than you think.
Piper Manning's about as tough as they come, she's had to be. She raised her siblings and thankfully they've flown the nest. All she has to do now is finish fixing up the lake house her grandparents left her, sell it, and then she's free.
When a huge storm hits, she runs into a tall, dark and brooding stranger, Camden Reid. The spark between them shocks her. Surprising her further, is the return of her sister and brother, each keeping their own secrets. It would be smart for Piper to ignore them all but Cam unleashes emotions deep inside her that she can't deny. And her siblings...well, they need each other.
Only when the secrets come out, it changes everything Piper thinks she knows about her family, herself...and Cam. With the chance of the new life she craves within her grasp, can she find a way to let go and embrace it?  AMAZON LINK
4 STARS

Piper is a somewhat flaky but totally likeable thirty year old woman.   She is totally responsible when it comes to helping take care of other people but her own life?  She is the Lists Queen.  Lists that she never seems to get around to very much.  And of course like any red blooded woman she has her secret, secret naughty list too. All listed in her carry everywhere Journal. Because of all the early responsibility placed on her shoulders she's used to having to be in charge all the time.  Her siblings call her The Fixer.  But she's had to be and isn't sure how to be anything else or even have time for herself and what she wants.  When is her life ever really going to start?  Her dreams, her hopes, her plans have been on hold for so long. But like Cam observes she loves fiercely.
It's funny in the beginning how Cam was only referred to as "Hot Guy" for quite a while. That made me smile.  And it wasn't the only times that this story did that..made me smile.
Piper finally lets Cam in as her temporary fling, she "thinks" that just might be safe.  Even though it take her a while to even let him in that far.
Both of the main characters were written with really good depth.  And not just them but also the supporting people as well.  That would be Winnie, Gavin, (Piper's sister and brother) and Emmett (Cam's dad).
This story is definitely filled with emotions, loyalty, love, romances and surprises that pop up at unexpected times.  One of the romances I wasn't as comfortable with.  But it was written with solid emotions and it was done tastefully.

There was also the unexpected short Reading Group Guide questions at the end of the book.

Overall a well written book with a good Epilogue too.  Which means I remain a fan of the books by Jill Shalvis.


"I voluntarily read and reviewed an advanced copy of this book. All thoughts and opinions are my own.”
Posted by Flame at 10:31 AM