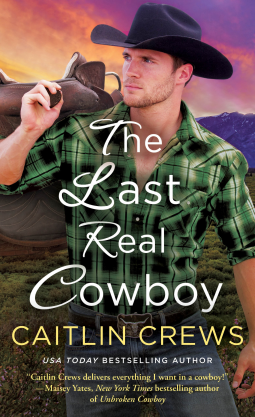 USA Today bestselling author Caitlin Crews returns to the Cold River Ranch series with The Last Real Cowboy!
In Cold River, sometimes forbidden love is the sweetest of them all…
Perennial good girl Amanda Kittredge knows that her longtime crush on Brady Everett was never really supposed to go anywhere. But when Brady comes home to during Amanda’s first attempt at independence, well, who better to teach her about rebellion than her older brother’s bad-boy best friend?
Brady’s plans did not include being forced to work the family homestead for a year—and yet, here he is. And, to make matters worse, his best friend’s innocent little sister is making a menace of herself in the most grown-up, tempting ways. When Amanda begs Brady to teach her about men, he knows he should refuse. But could Brady’s greatest temptation be his salvation? AMAZON LINK
3.5 STARS


It had quite an unusual start to the story.  Not exactly what I was expecting.  It definitely was awkward and almost painful to "watch".  But it did paint quite the clear picture of how overprotective her four huge brothers were.  Her whole family and maybe most of the town still thought of her as twelve year old "little Amanda Kittredge".  She's been feeling VERY invisible and things come to a head and she's had enough.  And I did enjoy because of those times that her fiery Kittredge temper began to catch fire and came out to play.  She started to push back and go toe to toe with some people and I liked that.

One thing that Amanda and Brady had in common was that feeling of the real "them" being invisible. Not really seen clearly and rarely heard or taken seriously.
The tension between all three brothers was well done.  The emotions as they continued to battle their "demons of the past" quite clear.  They still carried some of the emotional scars when it came to their hideous  but deceased father Amos.
Emotions are riding pretty high with Amanda as well.  She has the opposite kind of family, a very loving but most times a smothering one; at least over her.  I did feel like her mother and father were kind of odd though.  Not that the story got to deep on the why of that though.
While I liked the story it was with some reservations as well.  There were more times than one when the story felt SO slow that it felt stalled.  As well as re-hashing several things over and over without any real resolution until the end at least.  There is a H.E.A. so that does help.


I voluntarily read and reviewed an advanced copy of this book. All thoughts and opinions are my own.”
Posted by Flame at 10:02 AM