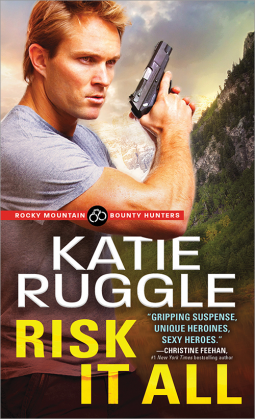 
Five bounty-hunting sisters
Deep in the heart of the Rockies
Fighting to save each other
...and the men who steal their hearts
Cara Pax never wanted to be a bounty hunter. She's happy to leave chasing criminals and tackling skips to her sisters. But if she wants her dreams of escaping the family business to come true, she's got one last job to finish... Only problem is, she doesn't think her bounty is guilty.
Henry Kavenski is a man with innocence to prove. When he realizes that Cara believes him, he'll do anything to keep her out of harm's way. Escaping criminals and dodging cops might not be the best time to fall in love, but Henry and Cara won't give up, not when there's a chance at a new life ahead—if they can survive the fall.  AMAZON LINK
4 STARS

In the first chapter you get a really good clue about how over her head Cara is.  She had it right that she was better in research than she was out in the field.  But pretty soon, she isn't going to have much of a choice about that.  She is kind of quirky with some pretty funny self-talk.  That would be muttering under her breath.  She also has a very sensible side that argues with her sassy, not so logical side.  Oh, and she says she also has a Princess side too.  What an imagination this gal has.  She can terrify herself all by herself with it.
Actually felt like as a reader I knew more about Cara than I did Henry.
Henry seemed to  not have a lot to say and kept his information close to himself.  Several times described as a very large, handsome man with icy blue eyes,  whose emotions seldom showed on his face.  He also responded (when he did) with a nod or a grunt.  There are several times though that Cara begins to get behind his wall.  She sees a small, twitch of his lips that passed for a smile.  Or at least she thinks so.
There is humor in the story because look who were are dealing with...Cara.    There is intense drama too.  The car chase alone was super intense and edge of your seat reading.
I did have some mixed feelings about this story.  There were some times when the story seemed to slow and didn't give much insight into much personality for Henry.  There is also several people that I would have liked to have seen face consequences.  However, the main crooks did.  I finally decided that 4 Stars on Amazon was the right rating.    Cara and Henry being stalked was well done and the car chase scenes alone definitely deserved it.  It was so real I could almost taste the wind and the danger as they raced to escape.

Everything comes to a dramatic conclusion with SEVERAL surprises heading at us like a runaway train.
There is a good Epilogue that is a whole lot calmer in nature. .


"I voluntarily read and reviewed an advanced copy of this book. All thoughts and opinions are my own.”
Posted by Flame at 7:46 AM