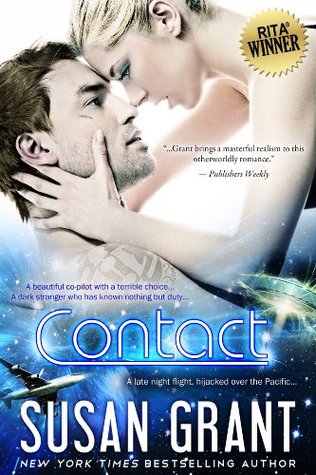 When First Officer Jordan Cady’s 747 is snatched from the sky by an immense UFO, she must put aside her own fears and take charge, exactly what the single mother of a six-year old daughter knows how to do. With no power or communications to the plane, Jordan and her crew are far from understanding who—or what—has hijacked them, until an envoy is sent to deliver unthinkable news.

Space Force Lieutenant Kào Vantaar-Moray expected gratitude and not defiance from the woman pilot-commander. No matter how hard he tries to convince her that his people saved her and hundreds of her passengers from certain death, he can't erase her suspicion that in the eyes of those on Earth her aircraft has vanished without a trace. The more involved he becomes with Jordan, the more his loyalties are torn. He owes his ship commander respect, and his very life, but a new life beckons with Jordan—if he can save her and her people before a heartless enemy reveals its true intentions..
AMAZON LINK
5 STARS

I loved this book.  This story was even better than I hoped it would be.  I can fully understand why it was a RITA winner!
The world building was just that Out of This World good.  *pun intended*  The cultures, the aliens, their appearances, the languages and some of the histories as well as some of the power structures, computers and technology.
The people in the story in the story had depth and complexity and the tension of the abduction was kept high.   There was a huge group of people who were snatched out of the sky.  The passengers and the crew added to the confusion, fear and tension.  They had a ways to go but then they started to work together as a team.  That really happens even more when they realize they have to wade through some dangerous lies.  Who is really friend and is really foe?  You'd be surprised.
The friendship to romance between Jordan and  Kào was a good one.  No falling into bed at first sight although they do feel some sparks early on.  Both of the main characters had some painful experiences in their past.   Kào bore the marks of his being tortured, both physically, emotionally and mentally.
Jordan took her responsibilities seriously even though she hadn't wanted them.  She was in charge of the plane and her people no matter what.  She also made a promise to her daughter Roberta to make it back home and she always keeps her promised. I loved that Roberta was called by the nickname Boo.
Prepare to sit at the edge of your seat as you read the story.  As it heads to an explosive ending, there are several shocking revelations.  One I suspected, although I didn't have the full story until towards the end.  And there was at least one that I never saw coming.  It was intense!
There are no cliffhangers in the book and I enjoyed the Epilogue.  The Epilogue that might be able to open the door for more adventures or not.  But all in all, THIS story was complete.

By the way, the  attractive eBook cover is what first got my attention.
Now, I will be keeping an eye out for more books by this author.
Posted by Flame at 9:13 PM