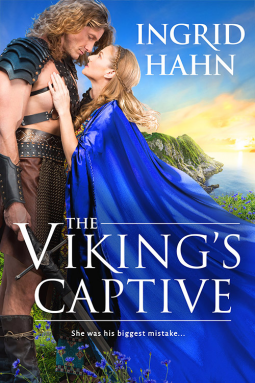 Thorvald Longsword can’t believe all he has to do is kidnap the daughter of his jarl’s enemy to get his land back. Easy. But when he finally snatches the princess up and tosses her over his shoulder, the beautiful spitfire makes him question his determination to get his land back at any cost.
Alodie gladly agrees to impersonate the princess so the bloodthirsty Northmen will take her instead. While Alodie might be ready to die for her people, she wasn’t prepared for how her pulse races for the maddeningly noble captor whom she’d just as soon hate.
But when Thorvald finds out she’s not who she says she is...it could mean death to them both.
AMAZON LINK
3 STARS

This book had good and honorable main characters. Alodie and Thorvald were people that I found interesting. The world-building involved two different cultures and was done well too. Things in the story were well described.  Several different secondary people  added interest.  However, I did have mixed feelings about the story. It had moments that I enjoyed and then it just seemed to settle to a point where not much was happening.   Even though their were challenges that had to be overcome by both Alodie and Thorvald and a totally fungus like villain in play.  It gave me a smile here and there and has a good outcome.  I just wish I had liked it more. For me, it just felt like the story went on a bit too long.  I guess that is the bottom line for me.


I voluntarily read and reviewed an advanced copy of this book. All thoughts and opinions are my own.”
Posted by Flame at 6:01 PM