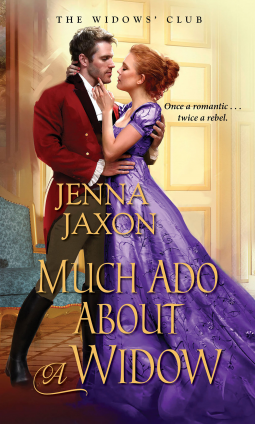 Lady Georgina Kirkpatrick defied her family, jilted her fiancé, and married the man she loved. But when her husband died at Waterloo, she was delivered right back into her father’s power . . .

Victory is sweet—but England’s triumph was Georgie’s rout. Now that she’s widowed, the loathsome marriage her father first arranged has simply been renegotiated. With neither money nor rights, and nowhere to flee, all she can do is cherish her last weeks of freedom. . . . Until a band of ruffians overtake her carriage and kidnap her. When she escapes in seaside Brighton and encounters her brother’s rather wild friend, Lord St. Just—whom she suspects aspires to be a pirate—she’s prepared to entertain more of his adventurous suggestions than usual . . .

St. Just knows his mind and his duty, and he loves a challenge. Helping a fair lady make her farewells to hoodlums suits his talents well. Within the hour he has Georgie, her lady’s maid—and her little dog
too—sailing for his castle in Cornwall. Meanwhile, the lady’s entire family, her kidnappers, and her scheming intended are in pursuit. But as he and the indomitable Georgie grow closer, he begins to suspect that together they will prove a match for them all . . . AMAZON LINK
3 STARS

I had a hard time getting into this story.  It started out okay but it didn't really draw me in all that well.
No one should be forced to marry someone they don't want to of course.  And I understood why Georgina was going to go along with marrying Lord Travers.   HOWEVER, I had a problem with Georgina's thinking.  She is repulsed by Travers, he's a leering creep, with a horrible reputation that she has heard about.   But more than once she thought she had already married the love of her life so how bad could it be?  Yes, I know the alternative is to be tossed out on the street without anything and no one to help her. Come on...and she's been married before and she doesn't think it couldn't be that bad?  Ah, someone slap that chick on the side of her head!    Okay, I've calmed down now and realize that Georgina has been doing a whole lot of lying to herself in order to force herself to marry The Creep.    And speaking of force, her father is one arrogant, my-way or the highway kind of guy.  And nothing is below him when it comes to forcing people to do things his way.  Sorry never going to like that guy.

Georgina's brother Jemmy and his wife Elizabeth add to the story although there really isn't much they can do to help her.  They want to but daddy dearest holds the purse strings and there is no give at all on that.  Georgina's maid, Clara and Georgina's beloved dog, Lulu are on her side.  But once again not much they could do either.
Things speed up rather rapidly around Chapter Twenty as one time after another the main characters are pursued.  Not to worry though, not only is there danger but also some humor and a H.E.A.   It  wouldn't say that it's a favorite but it did have some good points.

“I voluntarily read and reviewed an advanced copy of this book. All thoughts and opinions are my own.”
Posted by Flame at 6:48 AM