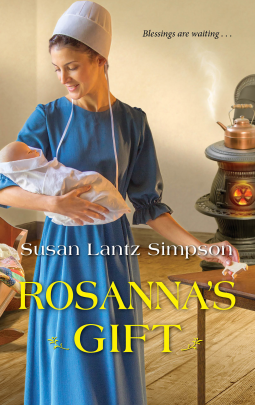 In Southern Maryland’s serene Amish country, one young woman’s life is changed by an unexpected request . . .

“She’s yours.” Until now, Rosanna Mast’s hopes for the future have all revolved around handsome Henry Zook. But when a young Englisch girl places her newborn daughter in Rosanna’s arms and utters those words, shock quickly turns to fierce, protective devotion. Between helping her midwife mamm and caring for her own siblings, Rosanna has plenty of experience with babies. And who wouldn’t love a sweet-natured boppli like little Mollie? Yet to her dismay, Henry has no intention of ever taking on another man’s child. Instead, it is steady, thoughtful Paul Hertzler who becomes Rosanna’s staunch supporter.

Paul knows he should have acted sooner on his feelings for Rosanna. Now, as her dream of adopting Mollie meets unexpected hurdles, he sees a way to help. Rosanna would do anything to keep baby Mollie—perhaps even agree to marriage. But will Rosanna continue to hold him at arm’s length, or see that he longs to offer her the love and family she deserves? AMAZON LINK
4 STARS


I really wasn't looking for a Amish book to read.
Because so many have disappointed me and there is just so few that I liked.  But I have to say when I saw this book cover, I slowed down to take a closer look.  I think it was the tenderness on the woman's face , freshness of the picture and the title of the book.   And the book information pulled me in even  more.  So, I did end up liking this book.

Emma is Rosanna's best friend and she was someone that added some honest, fun spice to the book.  Their friendship was also sweet and wholesome with laughter too.
I also enjoyed the Amish family that Rosanna was part of.  You could feel the love shine in their interactions.  They were shown in a positive light but with the usual quirks you might find in any family.  Like brothers teasing their sisters and brothers practically eating everything in  sight.  Family.
Frannie (another Amish girl) shows that girls will be girls no matter where they live.  As English or Amish, they can be catty.  Can anyone say Meow?
Paul wasn't sure about how to really get Rosanna's attention on him but he did show up and they start a slow friendship. He was such a good person in so many ways and I liked that we got both of their P.O.V.'s.   Rosanna was a bit gun shy with Paul.  She didn't trust her feelings about guys after her non-starter romance with Henry.   The story did slow down for a bit at one point. Mainly because of several issues being re-hashed a few extra times.  I had to remind myself that Rosanna was a young girl who was disappointed in her "first love" experience and was trying to find her way.  Then, add a baby.   However, about the time I was going to mentally complain, things began to happen again in the story.
Overall, I enjoyed the story. So glad that I picked it up to read.

“I voluntarily read and reviewed an advanced copy of this book. All thoughts and opinions are my own.”
Posted by Flame at 7:03 AM