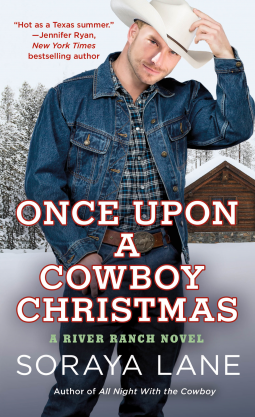 Billionaires, cowboys, and romance collide during the holidays in this next book in the River Ranch series!

It’s the most wonderful time of the year at the Ford family ranch. Will one cowboy’s homecoming be the greatest gift of all?
He left town and never looked back.
Cody Ford is a Wall Street honcho with humble Texas roots. This holiday season, he’d be content to just stay in New York and not face his family—and dodge their questions about when and with whom he plans to settle down. . .and if he will do so back at home. But his father isn’t getting any younger, and Cody doesn’t want to miss any last chances to see him and the rest of the folks back on the ranch. The last person Cody was expecting to see? His one-time girlfriend, Lexi Murphy, who’s been working as his dad’s new live-in nurse.
She never forgot him. Can she ever forgive him?
Lexi still holds a grudge against Cody. Back then, the college-bound heartthrob believed he was too good for a small-town girl like Lexi. But now Cody can’t help but see her in a whole new light. Could it be that this beautiful single mother with an unbeatable can-do spirit is the one he’s been waiting for all along? That depends on whether Cody can prove to Lexi that, this time, he means business—and if a sudden snowstorm can lend just the right amount of Christmas magic to help move things along. .
AMAZON LINK
3.5 STARS


Both of the main characters had depth and challenges and I liked them both.  Well, even though Cody could be such a tactless jerk at times.  All in all it was an emotional story.  When Cody and Lexi meet back after all those years it was one surprising encounter.
Cody's family was one tight group of people even though Cody had run out on them.  His father adds some spunk to the story even though he is so terminally ill.

Wow, I think his brother Tanner had it right when it came to. Cody's approach to dealing with people.  He basically said, you don't live in the real world do you?  And several other times when he urged Cody to reveal something and he wouldn't?  Cody blew him off saying everything would be fine.  I totally agreed with Tanner's assessment that he was into wishful thinking.  Cody did have a lot of good qualities but he was also kind of selfish.  He wanted what he wanted and he was used to pushing through to get it, no matter what.
I think that the world-building when it came to the family and people's history was pretty good. The one down-side thing I would mention is that if felt like a little bit too much time was spent re-hashing  how Cody ran away because he was afraid to stay for the pain of his mother's slow battle with death.   About how the memories still plagued him and it made him want to run again.  He wanted to stay but he wanted to go.  It felt like it slowed the story down at times and went on too long.
Things work out to a H.E.A. for Cody and Lexi although you just know it won't be a walk in the park.
A nice Epilogue rounds everything out.

“I voluntarily read and reviewed an advanced copy of this book. All thoughts and opinions are my own.”
Posted by Flame at 9:31 AM