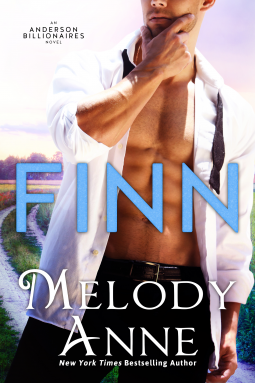 New York Times and USA Today bestselling author Melody Anne begins a sizzling and heartfelt series about Joseph Anderson’s long-lost nephews.
Finn Anderson is a loyal military veteran who has no desire to live a life of luxury and ease, but sometimes a person doesn’t get a choice. His life is flipped upside down when he and his four brothers learn they’re long-lost relatives of the absurdly famous and wealthy Joseph Anderson. The eccentric but generous billionaire puts the brothers to work building a new veterans center, and that’s not all: Joseph won’t stop until each nephew finds love.
Finn has never expected or wanted an easy life, and he struggles with his early retirement from the elite SEAL team. But when a very confident Brooke Garrison literally sweeps him off his feet during a self-defense class he’s teaching, he thinks less about his past and more about a brand-new future.
If Finn knows anything for certain, it’s that he can’t let this woman get away. Though Brooke is tough and compassionate, the loss of her brother has left her vulnerable. She isn’t sure she can risk loving and losing another person in her life, including a very determined ex-SEAL. Can the two of them look beyond their past wounds and embrace what they’re feeling?  AMAZON LINK
3   STARS

This was a good, emotional story with interesting main characters. The rest of the Anderson brothers also added to the story.  As did the other unexpected family members that suddenly popped up into their lives.
Finn doesn't trust easily, not after his life experiences starting with his bad-to-the-bone father.  So when his "uncle" Joseph shows up, he doesn't believe everything he's heard about how good he is supposed to be.  Rich but a good man with an intense love (and some meddling) of family.  Finn is respectful but also quick to set up boundaries with his uncle.  He finds doing that with some of the rest of his "family" not quite so easy.  The rest of the family is loving and quick to pull them into the group.
Brooke also had a lousy childhood having no one in her corner expect for her beloved brother.  He was always cheering her on.  Now that he is dead, she is left trying to overcome her grief.  And her walls are up high around everyone else.  Well, except her longtime best friends who are like sisters to her.  Sarah and Chloe definitely add spice and understanding to her life.  Finn scares her.  Besides her attraction to him, she feels like he sees too much and too deeply into her.
How does Finn feel about Brooke?  He falls fast and hard for her and enjoys the challenge that she often brings.  He's got a fight on his hands and his usual techniques with women just isn't going to work.  I liked how creative he got when he went on the chase for her. Not one of their "non-dates" was what would considered a normal date but they were interesting.
Yes, there will be sex in the story (lots actually) but Finn is in it for the long haul not just for a night or two of sex.
A couple of times it felt like the story dragged a time or two but it was probably because a couple of issues were re-addressed  a bit repetitively.
I would also like to have seen more about the veterans center but I guess the story was really more about the people and their challenges.
There is a good twist or two towards the end with a feel good H.E.A. and Epilogue as well.

“I voluntarily read and reviewed an advanced copy of this book. All thoughts and opinions are my own.”
Posted by Flame at 6:37 PM