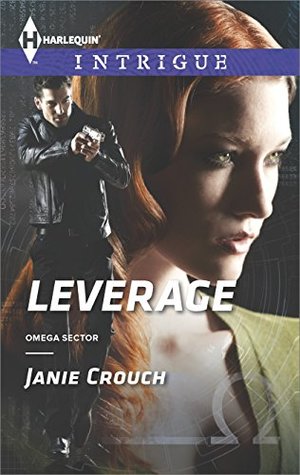 LEVERAGE
Computer game developer Shelby Keelan has a gift: a photographic memory of anything concerning numbers. When she inadvertently discovers a code linked to terrorist attacks within a popular Internet game, she's called in by the government to help piece together what she knows.

Pilot Dylan Branson finally has his life the way he wants it: simple, quiet and alone-as far from his covert operation past as he can get. He knows when he's asked by his previous boss to deliver one tiny package to Omega Sector headquarters that his answer should be no. Especially when the tiny package ends up being a cute and quirky redhead he's instantly drawn to.

What should've been a routine trip turns into a desperate fight for their lives when someone is determined to see that Shelby and Dylan don't make it anywhere alive. AMAZON LINK
4 STARS

Another really good story by Janie Crouch.   Both Shelby and Dylan were interesting people that were easy to get involved with.  Shelby was a genius with numbers but not so much with people and endless chit-chats.
Dylan was still grieving his losses and he just wanted to be left alone.  So although their reasons were different, they did have the loner thing in common. Dylan had a slew of loving family that didn't want to remain pushed outside of Dylan's life.
Shelby just wanted piece and quite in her life without someone constantly yakking in her ear.  She had her mother (who just didn't get her and in Shelby's words drove her nuts.)  She also had Megan as a friend, who was really close to her and DID totally get her.  Megan didn't think she was weird and just adjusted to what Shelby needed.

Looking for action, danger and adventure?  This book has it and kept me involved every step of the way.  There were some tender moments in their romance before one of them (usually Dylan) put his foot in it.  Without meaning to he hurt Shelby time after time for a while.  I also liked how two lonely people finally find a way to fight their fears.
Another good part of the story is that they finally discover who the mole is.