BOOK REVIEW- Forced in Between by Alexandra Ispas * 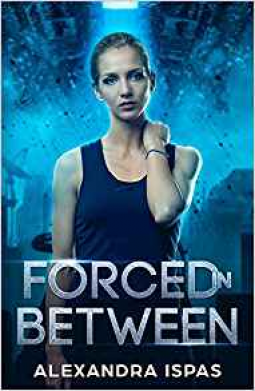 Somewhere in the universe, a group of people are making their stand against an invading alien race, but how much longer can they survive for?
Jennifer is the only girl in the Warband Academy. All she knows is that she cannot fall behind her training if she hopes to end the war. How or why she is there in the first place mattered less, until the day she was saved by the very creature she swore to fight against. Her world turns upside down as she finds out all the things she was never told, all the lies she had always believed. And yet, so much more remains untold.
The truths and lies in Jennifer's reality will change her decisions, and so, might even change the fate of humanity.
At least, that's what she must believe if she wants to survive in a world where she is one, and aliens are many.  AMAZON LINK
3 STARS

Not what I was expecting.  The start of the book felt odd.  Of course we are talking about a place full of guys and she is the only girl.  So odd, yeah I guess it would be.  It doesn't seem like they teach them anything but how to train for war.  Jennifer seems totally oblivious to the birds and the bees.  She is often called the girl in the story.
Mark, Peter and Nico figure in the story quite a bit in the beginning. Once, they were pretty close but begin pulling away from each other.   They have a bully trainer named Blockhead.  What I didn't get is if they are so important that they had to be constantly trained to exhaustion then why weren't serious injuries tended to?
I don't know, maybe this book was written for a much younger audience and I'm too old to enjoy this book very much.  It had some good moments especially with the little aliens.   But around Chapter 19 when it mentioned in a sentence that nothing of importance happened?  That was pretty much how I was feeling about this story.  But then, a few unexpected things do begin to happen.
There are several other young boys that have joined Jennifer's journey and they add to the story.  There is a fair amount of feelings shown in the book.   But at the end it finished leaving me with a feeling of it not being quite complete.
A plus for the book was that it was a clean story, without sex or swearing.

“I voluntarily read and reviewed an advanced copy of this book. All thoughts and opinions are my own.”
Posted by Flame at 11:20 AM