BOOK REVIEW- Get a Clue by Jill Shalvis 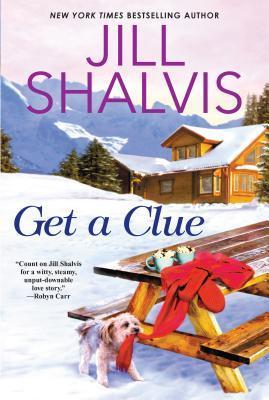 When Breanne Mooreland gets left at the altar, she decides the best thing to do is to go on her honeymoon alone. Of course, she loses her luggage along the way and ends up snowed in at a Sierra mountains lodge run by a noticeably quirky staff. And before she can order room service, she finds a naked—and gorgeous—man taking a shower in her suite who refuses to leave . . .

Vice cop Cooper Scott is in serious need of a vacation. He’s not about to give up the only available room to a stranger because of a mix-up. They’ll just have to make the best of it by sharing the bed. They’re mature adults after all. But when Cooper wakes up kissing the long, leggy Breanne, he wants to show her exactly what the honeymoon suite is intended for. That will have to wait, though, because a screaming Breanne has just stumbled over one very dead body AMAZON LINK
4 STARS

Quirky and different from the start.  Some of the characters were kind of spooky almost like the Adams family.  The way they just kind of glided in here and there without much notice made it even more spooky.  In the story make sure the power goes off, the tension spikes.  And don't forget the dead body.
The humor was also off the charts too.  I really enjoyed at the beginning of each chapter there was a "note" from Breanne's journal.  So many of them were really funny. The organized notes that she placed in her palm pilot were also smile-worthy.  There were also other funny moments and conversations along with some pretty serious heat between the two M.C.'s.
Both Breanne and Cooper were really good maim characters.  Cooper the burnt out cop and Breanne the woman who was vitally alive but also felt like she was one step away from making another mistake.  That's why she came up with the "no more men" rule.  Yeah, that didn't last long.
The staff of the resort were interesting and had you guessing all the time on their character.  They didn't give up much, so it had to be peeled a bit at a time.  Not one of them seemed totally "normal" whatever that is.
A twist I didn't see coming was an excellent way to bring the story to close.  Although there was more than one twist when I think about it. Very few things were as they appeared to be.
My final thoughts were that it was an enjoyable story.
Posted by Flame at 7:13 PM