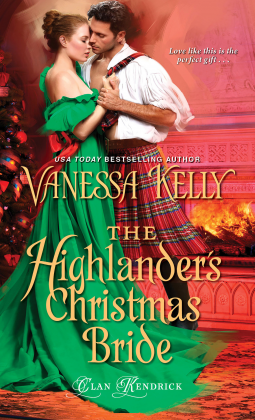 In bestselling author Vanessa Kelly’s irresistible Clan Kendrick series, Christmas in the Highlands means family, celebration—and for one brother, the beginning of a passionate adventure . . .

Being thrown over by the man she expected to marry was humiliating enough. Now that Donella Haddon, grandniece of the Earl of Riddick, has also proven a failure as a nun, she has no choice but to return to her family’s estate. The brawny Highlander sent to escort her is brash, handsome, and the only thing standing between Donella and a gang of would-be kidnappers. But the scandal in her past can’t be so easily outrun . . .

Wealthy widower Logan Kendrick was expecting to meet a plain, pious spinster—not a gorgeous, sharp-tongued lass who can hold her own in any ambush. Though she’s known as the Flower of Clan Graham, Donella is no shrinking violet. In fact, she might be the perfect woman to bring happiness back to his lonely little son’s life, just in time for Christmas.  But first he must protect her from ugly gossip and a mysterious threat—and convince her that their wild, unexpected desire is heaven sent.
AMAZON LINK
3.5 STARS

I liked both of the main characters who each had gone through different kinds of suffering.
They each had plenty of secrets but Donella probably had a few more than Logan.  I liked how the author slowly unwrapped those secrets.  With Donella even after one secret comes out, you are given the sense that it's like an onion being peeled and that there are more layers.
It was also laughable how unsuited Donella was to be a nun and how she just didn't see it.  She did try hard though but it just wasn't really in her nature.  After awhile, she does begin to understand why she tried to be one.
Poor Logan.  His son Joseph is just a six year old boy who needs his dad.   But because of their long separation, things aren't going all that well  between them.
Both Donella and Logan have some VERY interesting relatives who do add to the story. Some of them funny and quite quirky but loyal to the bone.
There are several times that I smiled because of something that was going on.  One of those times was how ever time something embarrassing happened to Donella, Logan would have an unusual way to comfort her.  He reminded her that the Kendricks were known to kick things up and be in the middle of trouble.  Yes, the story does go on to show that too.
Donella also had some unique (and usually funny) ways to deal with troublemakers.  Like gossipers and prejudiced people)
I liked how the story ended.  There is a H.E.A. and also some good outcomes for some unlikely people too.

“I voluntarily read and reviewed an advanced copy of this book. All thoughts and opinions are my own.”
Posted by Flame at 8:38 AM