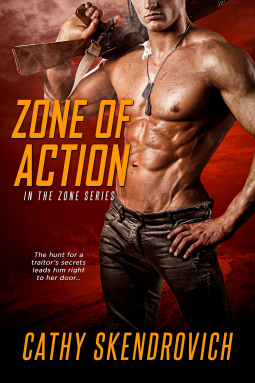 Former terror cell expert Audrey Jenkins has seen enough death and destruction to last a lifetime. When she uncovers her ex, Brett, a higher-ranking officer in her unit, selling military secrets, she turns him in and returns to the simpler life she has embraced since leaving the army.

CID Special Agent Cam Harris is a career military man with a strong sense of duty. When a military prisoner who once saved his life in Afghanistan escapes while in his custody, he requests the assignment to track him down.

Cam's manhunt leads him to Audrey's door. His prisoner—her ex—will resurface here, he’s sure of it. The feisty woman wants nothing to do with hunting down her ex, but when a terror cell she’s all-too-familiar with launches a deadly attack on army intelligence soldiers and officers, she knows it’s Brett.

Helping Cam is the right thing to do. But the attraction burning between them may be the mistake that gets her and Cam killed...   AMAZON LINK
4 STARS

This was a tense drama with plenty of twists, turns and surprises.  It also has a romance that develops at what could be considered the worst possible time.  Of course if these things hadn't  happened, the main characters might not have ever met.
I liked that Audrey was portrayed as a strong woman.  I liked it even better that Cam not only wasn't intimidated but was attracted to strong women.  Not that he'd had a lot of time for dating because he had such a heavy case load.
Audrey was good at what she did in the military but she walked away after a disaster that she felt responsible for.   The memories assaulted her as did her doubts about her ability to read people.   How good was she really if she couldn't prevent the disaster in the field and her disaster of a relationship with Brett?
The story was good when it came to describing the situations and locations around them.
There felt like there were several times that certain things were rehashed a bit too much.  Like how hot Cam's body was for one example.  But maybe that is to be expect, because eventually there was some heated moments.
Having said that though, it kept my interest all the way through.

Brett turned out to be a pretty well drawn turncoat.   The betrayal that Cam and others felt when it came to what Brett had done was real.  They could hardly believe this was from a man they had known but they had all seen the  proof.
There is also some humor in the story which I enjoyed.   The M.C.'s also get caught with their pants down at least once.
There is a good ending with a H.E.A. of sorts, filled with promise.  But also with the opening for further stories because part of the threat  from the terror cell is still out there.