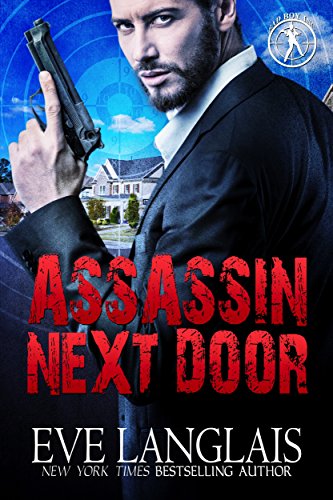 A killer with a white picket fence.

Suburbia, a great place for a man with secrets to hide—while investing in some solid real estate. The biggest drawback?

In this case, a neighbor with sexy curves and a bright smile. Good thing she’s not his type. Single moms with annoying exes are on the do-not-date list.

Calvin wants to; it’s just not happening. He can’t help but find himself drawn to the chaos next door. And when danger threatens his suburban lifestyle, this assassin doesn’t hesitate to act.

Killing people is easy. Domestication, on the other hand...AMAZON LINK
4 STARS

Yep, I did it again.  Found a series that I really liked but read all the books almost backwards.  This is Book 1 and I read it last.  Oh well, a good story is a good story.  And that should say a lot about the writing chops of this author. I enjoyed the story, the depth of the people, the secondary people and all of the action.  Oh and yes there will be some scenes of sexual heat.

I know Calvin is kind of a anti-hero but he does have standards.  He won't kill children or women.    He is also reviewing what he wants in his life.  He's always been satisfied with his life until he began to see that he wanted and needed more.  And his new neighbor,  Lily really brings that fact front and center for him.  While he doesn't hurt or kill kids, he hasn't been that enamored of them either.  Well that is until four year o, Zoe wraps him around her little finger.
The danger that Lily has been dealing with has been stretched on for  years.  She just can't seem to catch a break from her abusive, clever, manipulative ex.  As the story goes on you get a clear picture of how he manages to make people think that "she" is the crazy/psycho one.  Any time she might get some proof of his harassing her, no one wants to hear it. And it often mysteriously diapers.  Lily is drawn to Calvin.  But she's afraid that he would be in danger and in over his head if she lets him get any closer.   He tries to clue her in but she doesn't really get it.  Just how dangerous he is going to be to anyone who tries to hurt her or her little girl.
Interesting unexpected twist towards the end of the book.  Everything gets taken care of except for the one baddie did get away.  Well, that person won't get away forever.