BOOK REVIEW- He Loves Me, He Loves Me Not (: A Steamy Romantic Comedy) by Iris Morland 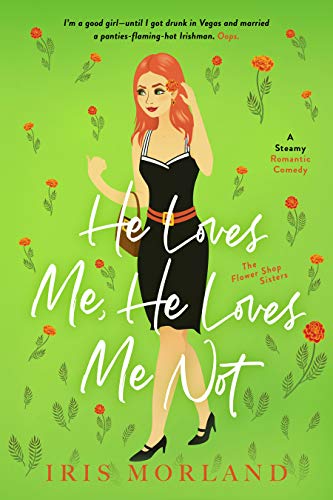 I’m a good girl—until I got drunk in Vegas and married a panties-flaming-hot Irishman.

I’ve always lived my life by the rules. Unlike my two sisters, I’m the good one. The responsible one. Going outside my comfort zone is when I wear red lipstick before five PM.

That comfort zone of mine? It’s smashed to smithereens on a wild night in Las Vegas when I met—and married—Liam Gallagher.

After one shot of tequila, then two, then too many to count, a good girl’s rules tend to disappear. And so do her panties, and her bra, and various other articles of clothing when she’s with an Irishman who knows his way around a woman’s body.

Now my husband wants us to stay married. For six months. He says it’ll be worth my while. Considering our chemistry underneath the sheets, I can’t say that he’s wrong.

Liam isn’t safe, though. Liam definitely isn’t comfortable. He’s like the male equivalent of wearing red lipstick in the daytime all wrapped up in an irresistible, dangerous package.

Yet this stubborn Irishman isn’t about to let me go, drunken Princess Bride-themed Vegas wedding or no.

Now I have to decide if I’m brave enough to break the rules for love.  AMAZON LINK
3 STARS

I had high hopes for this book but it didn't really do it for me.  Just wasn't my cup of tea.  I did give it 3 Stars on Amazon because there was interesting main characters, fairly interesting secondary people and humor.
I know the blurb said that it was steamy and yes it was.  But on the downside for me was it often came off as smutty to me.   The language for sure and some of Liam and Mari's physical interactions as well.
But there was also some charming times with the 2 M.C.'s.  Some temper tantrums and  not JUST from them.  So you can see my dilemma on how to rate it right?   So I settled with this rating because even if it wasn't my cup of tea it did have a few good things about it.  And it did have a H.E.A.
Posted by Flame at 4:44 PM