BOOK REVIEW- What a Scot Wants (Tartans and Titans, #3) by Amalie Howard 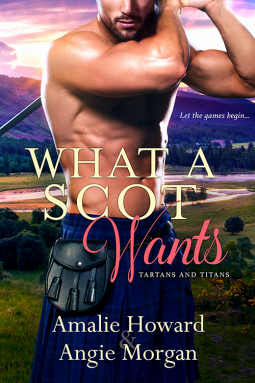 Highlander Ronan Maclaren must marry, but he’s in no particular hurry. He’s perfectly happy as the laird of his clan, running the Maclaren Whisky Distillery, and besides, he just hasn’t found the right woman.
Lady Imogen Kinley has cleverly avoided wedlock for years. Men, she has learned from painful experience, are not to be trusted. Determined to remain independent, she takes an indecent amount of pleasure in making herself as unattractive to potential suitors as possible.
When desperate measures are taken by their parents and a betrothal contract is signed, it’s loathing at first sight. They each vow to make the other cry off—by any means necessary. But what starts out as a battle of wits...quickly dissolves into a battle of wills.     AMAZON LINK
4 STARS


I really liked this book. It was also hysterically funny!   These two were SO creative when it came to how they were trying to chase off the other.  There were more than a couple of times when I laughed out loud at their  shenanigans.  And the way the author described some it made it even funnier. I'm thinking about Imogen and her showing up with a draft horse to a park filled with society people.  "A massive horse about nine hundred yeas old, plodded along the street, slower than ice could freeze."  Yes, that one did make me laugh out loud for sure.  I think I might have even giggled for a while too!

It's not all fun and games though because there are some unscrupulous people lurking around both Imogen and Ronan.  And they are dead serious on getting what they want. All of that leads to a whole lot of action.  It also caused me to wonder how in the world Imogene was going to escape an ex-fiance Silas and his obsession with her.
It all comes to a dramatic end and with a sweet Epilogue.


“I voluntarily read and reviewed an advanced copy of this book. All thoughts and opinions are my own.”
Posted by Flame at 6:00 PM