BOOK REVIEW- How To Love A Duke in Ten Days (Devil You Know, #1) by Kerrigan Byrne 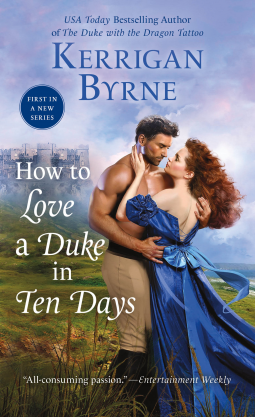 These men are dark, bold, and brave. And there is only one woman who can bring them to their knees...
Famed and brilliant, Lady Alexandra Lane has always known how to look out for to herself. But nobody would ever expect that she has darkness in her past—one that she pays a blackmailer to keep buried. Now, with her family nearing bankruptcy, Alexandra strikes upon a solution: Get married to one of the empire’s most wealthy eligible bachelors. Even if he does have the reputation of a devil.
LOVE TAKES NO PRISONERS
Piers Gedrick Atherton, the Duke of Redmayne, is seeking revenge and the first step is securing a bride. Winning a lady’s hand is not so easy, however, for a man known as the Terror of Torcliff. Then, Alexandra enters his life like a bolt of lightning. When she proposes marriage, Piers knows that, like him, trouble haunts her footsteps. But her gentleness, sharp wit, independent nature, and incredible beauty awakens every fierce desire within him. He will do whatever it takes to keep her safe in his arms.   AMAZON LINK 5 STARS


Just letting you know that you might need to brace yourself for the opening scenes in the opening chapter.  But it also sets the scene for a secret the rest of the book.  A secret that is mentioned  that Alexandra was being blackmailed for.
The Red Rogues was made up of three redheaded young women at a posh girl's academy.  Alexandra, Cecelia and Francesca were intelligent young women who wanted to learn more than just deportment and all the "skills" that society wanted them to learn.  They yearned to pursue subjects that boys were allowed but girls were not.  They also began to teach themselves languages, to drink like gentlemen did among other things.   The bond was strong and became even stronger after "The Incident".    They never called it that but I am using that phrase so I don't give too much away.  These girls were so different in personalities but so much the same when it came to loyalty.  I enjoyed that a lot.  After having read this book I now want to know each of their stories too!
I'll admit about  mid-way through the book I had a suspicion of who the blackmailer was.  And I wanted to rush through to see if I was right.  But I held myself back because the story was just too good to rush through.  I'm sure glad that I waited, the blackmailer wasn't who I thought it was and turned out to be a surprise.

Other twists, turns, and surprises are included in the story.  And also a lot of emotions and mistrust which made this a really good story. So often Alexandra and Piers would make a good step forward and then doubts would come in and they would be back 3 steps and have to start all over. Piers was huge and fierce but that's not all that he was.   But he'd also been hurt emotionally and not just from his facial scarring.  He's used to being suspicious of people because of his title and wealth.  Women especially had proved unfaithful beginning with his mother.  So, you can see there is a strike against Alexandra before things even get started.
Am I satisfied with the ending though?  You betcha!

“I voluntarily read and reviewed an advanced copy of this book. All thoughts and opinions are my own.”
Posted by Flame at 5:53 PM