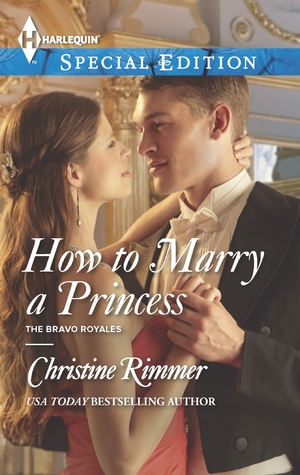 A Bravo princess always gets her man—and she'll settle for nothing less than true love in the newest addition to USA TODAY bestselling author Christine Rimmer's popular miniseries, The Bravo Royales!
Alice Bravo-Calabretti was expected to conduct herself like a proper princess. No more impulsive jaunts to neighboring countries. No more tabloid escapades. But the hot new stable hand was a scandal waiting to happen. His bold blue eyes and come-hither smile could tempt a Bravo Royale to misbehave. Until Alice discovered her "penniless groom" was an American tycoon looking for a princess bride!
Alice was everything Noah Cordell wanted in a wife. But his royal heartthrob refused to say "I do" until he gave up his most carefully guarded secret. And she wouldn't settle for anything less than everything he had to give. Only then could they share a true meeting of minds and hearts—Bravo-Cordell style! AMAZON LINK
3 STARS

I liked it.  It was different. Also emotional with good main characters and good world building.  It was also a fairly fast story to read.

There were also members of Alice's family included.  Her brother Damien (or Dami as Alice called him) in particular was a minor person in the book.  But it also looks like he gets his story in a book after this one.   A person who plays a fairly big part of the story is Noah's sister  Lucy.   The way that Noah and Lucy grew up explains a lot about how Noah tries to control things.   The "L" word is not something that trips off his tongue.  He's used to laying down the law and people get in line.  He's not abusive but he is determined and skilled at getting what he wants.
Alice is attracted to Noah and cares about him but nobody is going to tell her how to live.  You can see where some of the fireworks are going to come from.
There is a H.E.A. to the story as situations are worked through.